Review: She Has a Name (Fringe) 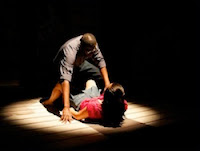 If you think Canada is immune to human trafficking, you only have to recall the recent story of young girls in Ottawa accused of forcing teens into prostitution.

Playwright Andrew Kooman commented that justice can only be realized if people become aware and take action. Telling stories is one way. She Has A Name attempts to accomplish this by portraying the brutal world of human trafficking. Director Stephen Waldschmidt suggests in his Director’s Notes to let this play have its way with you; let in the story. It had its way with me.

Jason (Carl Kennedy) is a Canadian investigator who poses as a customer in the brothel where 15-year old Number 18 (Evelyn Chew) is a sex slave. Jason is determined to build a case against the brothel, and get her out of there. I liked that it’s not a play where everything is wrapped up nice and neat at the end.