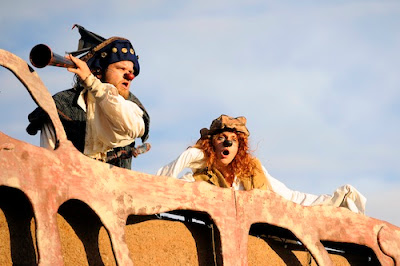 LABRÈCHE-DOR:  The way the program works is the cast is selected from among graduating theatre students. This means we only do one year with Théâtre La Roulotte.

We’ve been working on this year’s presentation of Peter Pan for a few months now. The show has been running since the end of June, ending September 9. We’re five graduates from two different schools and it’s our first real contract as actors.  It’s really fun to have this kind of energy in the play and be outdoors; feels like it’s perfect for young actors.


In this adaptation, the pirates are the parents who actually change into Hook and Crewman.

UPSTAGE: I guess the atmosphere must be amazing because everyone is learning together. Even though from two different schools, I assume they’re people you’ve studied with.

LABRÈCHE-DOR: We’re all friends so we know each other well. It’s fun to actually get out of school, work with professional actors and to learn what work is going to like later on in our life.

UPSTAGE: A definite learning experience. You’re doing Peter Pan, a story everyone knows, tell us about this production.

LABRÈCHE-DOR:  We have a beautiful adaptation. While it’s a play for young people, the real story of Peter Pan is very touching.  It’s a story about  the loss of a member of a family and how everyone deals with it.

In this adaptation, the pirates are the parents who actually change into Hook and Crewman. They become like parents because they can’t deal with their pain. So it’s oppressing for the other children who are trying to break free from feeling oppressed.

UPSTAGE: So the parents become the villains in the story.

LABRÈCHE-DOR:  I play one of the parents; it’s like playing two characters at once. When they become parents they are presented as clowns. Even though it’s funny we see they are in a lot of inner pain and are just trying to make sure nothing bad happens to their children.

UPSTAGE: Is the audience made up of mostly children?

LABRÈCHE-DOR: In the morning, it’s mostly groups of children from summer  camps. At night usually parents with children. The children tell us after the play how much they loved it. The parents say how much they were touched by it. So we’re offering a show that kids can enjoy, and parents can appreciate.We’re giving them the essence of theatre: a story they can see and feel.

UPSTAGE: Tell us a little about how this production presents Peter Pan’s children leaving the real world for fantastical adventure?

LABRÈCHE-DOR: That was difficult. With a very small budget how do you make children fly across the stage! We had to find some kind of energy in the role-playing  to make this fantastic world live through us.

We have no Tinker Bell so we have bells on sticks and we have to make believe she’s talking to us in the character of a crocodile.  The way the director had us work was very imaginative. At first we thought we weren’t capable of making believe we’re mermaids in a pond. We’re trained to be emotive actors. In the end, we found it’s really fun to make images out of our bodies.