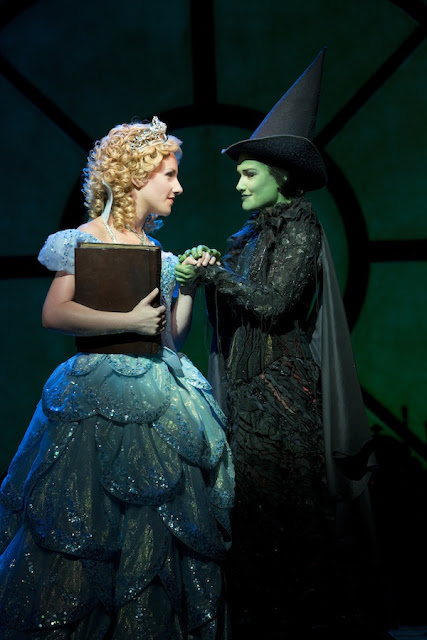 
WICKED, THROUGH AND THOUGH
Brush up on your Frank L. Baum and watch the power
joel fishbane
Brush up on your Frank L. Baum before going to see Wicked, the Broadway sensation which has just rolled into Montreal. After taking New York by storm a few years back, the show is enjoying a healthy afterlife, with its own rabid fanbase and a pop-infused score that has become standard fare for musical theatre auditions across the land. The touring company has proved to be in fine shape to show Montrealers what the fuss is about: this Wicked remains a splashy, sensational and effective production of a generally powerful piece of musical theatre.
The show’s clever plot serves as prequel (and interquel, if you want to get specific) to The Wizard of Oz, delivering a behind-the-scenes look at the Wicked Witch of the West and the politics of the Emerald City. It’s the years before Dorothy Gale hit the Yellow Brick Road and young Elphaba (Christine Dwyer) is sent to Shiz University, where she meets the pompous Glinda (Jeanna de Waal) before raising the ire of the Wizard after she becomes a political activist hell-bent on securing equality for the Animals of Oz (and yes, that’s Animals with a capital A).

Wicked is essentially a story of a complicated female friendship

Any production of Wicked is wholly dependent on its Elphaba and Glinda, as the two witches form the heart of the show. The epic plot is filtered through the lens of their friendship, a smart decision that grounds the storyline: for all the clever reworking of the Baum classic, Wicked is essentially a story of a complicated female friendship that endures despite class difference, betrayal and war.
As the witches, Dwyer and de Waal do a fine job carrying the weight of both story and score. Composer Stephen Schwartz (Pippin, The Baker’s Wife, Godspell) has continued his long-standing trend of marrying pop music with conventional musical theatre, forcing his witches to sing like divas even as they progress the plot. Dwyer and de Waal prove to have little trouble in this respect and the rest of the cast easily follow suit. The entire company is generally strong, despite being hampered by the need to mimic the performances of the original Broadway cast. Watch especially for a surprisingly understated performance by Catherine Charlebois as Elphaba’s crippled sister, Nessarose.
Wicked isn’t a perfect show – its emotional core is strong but its plot is a little weak and there’s a lot of detail that gets lost in the shuffle. There’s a clockwork theme to the set that you’ll never understand unless you’ve read the book the show is based on (by Gregory Maguire). Meanwhile, the second act depends largely on the audience having a working knowledge of the source material, with much of the story revolving around revealing the origins of the Scarecrow, Tin Man and Cowardly Lion. Little explanation is given about Dorothy Gale: when she finally appears, the creators simply assume you’ll know who she is.
Even so, this remains a great piece of musical theatre and it’s well served by the company, who manage to make the show stunning in its spectacle, even when pared down to touring size. If one has to voice a complaint, it’s with the folks at Place des Arts. Although they provided French surtitles for the dialogue scenes, they didn’t bother to translate the songs – and in a show where the songs actually advance the plot, a Francophone audience may be left confused as to what’s happened between the start of a song and the end.
Wicked: the Untold Story of the Witches of Oz by Stephen Schwartz and Winnie Holtzman runs at Place des Arts until August 26. For tickets visit www.laplacedesarts.com or call 514.842.2112.
Posted by THE CHARLEBOIS POST at 3:12 PM