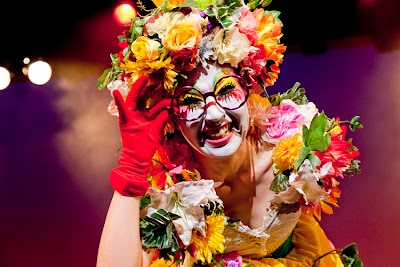 
Half of the bar customers were foreign people, so I created my show without language.

After graduating from University, I was a member of the Japanese theatre company, and have played many roles in variety shows in traditional theatre venues. The company toured a lot  in many other countries besides Japan.  Those experiences brought me much joy and excitement.

One day one of my theatre friends gave me a chance to play a short piece in a small bar in Tokyo. It was not very common in Japan to do a theatre play in a bar at that time. The owner of the bar was a British man who couldn’t speak Japanese, but he loved theatre. The Japanese audience seemed to be much more relaxed and comfortable watching a play sitting on a couch or chair having a drink, rather than in regular theatre venues. It also allowed for the actors and the audience to talk together over a drink after the show. I loved the situation and did a few more shows there.

I made good friends with the owner and started my original show there as Shoshinz in 2005. Half of the bar customers were foreign people, so I created my show without language. The owner and both the foreign and Japanese audience could enjoy my show together. I made a lot of new friends there and had some wonderful opportunities to develop my show.

In 2007 I participated in the Montreal Fringe Festival for the first time with Hanakengo, which totally changed my life. It wasn’t easy at all for us to be a part of the Fringe Festival.  Because we were from Japan, it was costly and we were having a hard time with our poor English. However, above all we had such beautiful days there, made good friends, saw many inspiring shows, and enjoyed poutine of course. I did love the Fringe spirit and people in the Fringe.

Even though I couldn’t speak English well, I was able to make a lot of friends through my own show. Physical comedy can cross the border of language, age, race, gender, and so on. Since then I’ve toured many cities in Canada, US, and Asia with my show.

When I began to create my first solo show in 2010, I wanted to make the happiest character ever in my life. I’d used many types of sounds from my body for years; then I named the character ‘Miss Hiccup’, because hiccup is my favorite sound. (Actually I still hiccup very often in real life… isn’t it strange and funny that an adult woman hiccups in a train or bar?)

I love to find tiny beautiful things in our ordinary world. There are so many little miracles here and there that aren’t recognized. I like to see dramatic stories via films, books, and theatre plays, but I can explore the same quality of dynamic beauty in my seemingly-boring real life, too.

The world is filled with amazing sound and music, allowing my imagination to find the ridiculous funny things to add enjoyment to my life. Laughter could make our lives better and brighter, and I favour the phrase; “The antonym of despair is humour.”

Our imagination has no limit. Hope you to come visit Miss Hiccup who never gives up on loving her life.

The mysterious Miss Hiccup lives alone, but is definitely not lonely. She is forever accompanied by a raucous cast of sounds and music that make her life an absurd adventure. A hilarious and beautiful story by award-winning Japanese performer.

A Day in the Life of Miss Hiccup is part of WildSide
Posted by THE CHARLEBOIS POST at 12:03 AM