First-Person: Frayne McCarthy and Blair Thomson on The Virgin Courtesan 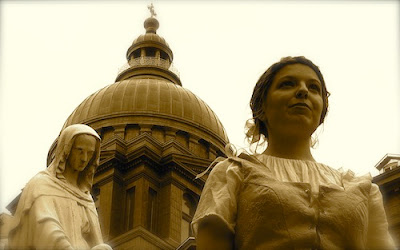 The Virgin Courtesan is an original musical play, written and composed by Frayne McCarthy and Blair Thomson, produced by Music Theatre Montreal as part of its New Works Initiative.

Frayne McCarthy, playwright and artistic director
The Virgin Courtesan amounts to just so many words and notes on paper, unless we have story-tellers to bring it to life.  Music Theatre Montreal has provided Blair Thomson and me with this tremendous opportunity to work with exceptionally gifted performers who are sharing not only their talent, but also their instincts, their ideas, and their support for this creative initiative. Their steady and positive feedback along with the continuing guidance of my dramaturge, Kevin John Saylor, is helping to strengthen the story being told.

Workshops can be wildly different, one from another. In more competitive entertainment environments, like New York or London, where workshops are constantly vying for the attention of producers or backers, the old-fashioned “radio-play” approach of having a semi circle of actors sit on stage in front of mics and music stands, is rarely still used. Slick is the new norm, and is expected in the professional arena of entertainment, even at the earliest stages, because producers’ expectations have broadened; because there is constantly more competition; and because a work is judged on first impressions and initial instincts. There is no such thing as “just a workshop” anymore. It has to have a wow factor.

But The Virgin Courtesan isn’t being workshopped on Broadway or in the West End, so I was initially content and certainly grateful with the idea that we’d present a low-key reading of the piece. But then wonderful things started to happen. A Creative Team started to take shape as friends expressed support and interest. People offered ideas, and we explored them. As resources presented themselves, we counted our lucky stars.

Melanie Michaud, our costume designer, fell in love with The Virgin Courtesan upon first hearing the demos. She spoke to me several times, offering to design for the show. At first, I politely declined, somehow thinking our workshop couldn’t possibly be worth such painstaking and detailed attention. But it was Melanie who reminded me that “it must be beautiful”… and not knowing when we might next see our characters live and breathe on stage again, I agreed.
And now we have a completely costumed presentation, stunning visual backgrounds, and professional lighting. And with our music played by a wonderful on-stage chamber ensemble, complementing the beautiful voices of our amazing cast, I think it’s safe to say that we’ve got production value that brings our workshop up to modern standards!

Our wonderful producers, Tara Bissett and Lara Oundjian from Music Theatre Montreal will be proud to say they made this possible. And Blair and I will always be grateful to everyone who’s made this project possible from its earliest days, looking optimistically towards a promising future.

Blair Thomson, composer and musical director
I am writing this having completed the third day of rehearsals of The Virgin Courtesan.  Our project is finally coming to life. A few words from a composer's point of view.

When Frayne and I began writing we were exploring another, completely unrelated idea. At some point I told Frayne something was pulling me toward his other idea of a musical set in early sixteenth century Venice. I wanted to compose a score that was both intensely theatrical and  beautiful. His response?  'Let's go to Venice!'


And thus it began. In his spare time during a long run in The Sound of Music in Toronto, Frayne wrote a compelling, edgy, theatrical, and deeply moving story of a young woman's harrowing journey of self discovery. Many of the lyrics had been written and I knew at once this was a piece that was as unique as it was emotionally rich.

The first thing was to constrain myself to compose music freely yet with focus. We agreed the piece needed a sound, something that could only be the music of The Virgin Courtesan. Thinking long term, I said when we reach the West End or Broadway (you gotta think big, right?) I would prefer a string ensemble. No brass for The Virgin Courtesan! I had a commission with the late CBC Radio Orchestra, and decided to test out some harmonies. Slowly, I started carving out the music, using ''The Virgin Courtesan chord''.

With the help of friends committed not only to our piece but to musical theatre itself, we began creating demos. One memorable session featured Frayne singing a four voice men's choir, each part four times, giving the illusion of sixteen men singing together. Robert Marien, Lisa Forget, Mélanie Leblanc, Patrick Olafson, Ariane Gauthier, Caitlyn Milot, Jason Van Asten and Andee Schuster, donated their incredible voices - I am still moved by what they did for us for it was in part because of them that Music Theatre Montreal decided to produce this workshop. 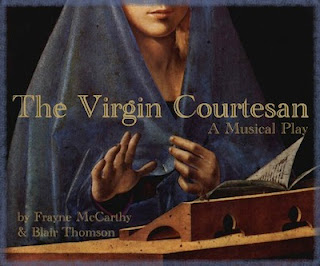 Composing  is a lonely business but immeasurably satisfying. Every note squeezed and caressed is there to serve the lyric, the character and the situation. Nothing is arbitrary. When I am satisfied (ie. when I have cried, or yelled, or have watched the hair on my arms rise),  I call Frayne: ''I've got it, man. It's #*?#! awesome!" We meet, I play it, singing with reckless abandon, hoping he likes it.

With the gifted Mathilde Côté, assistant musical director, the actors are beginning to feel the harmonies that define The Virgin Courtesan. It is an illuminating experience with light now replacing the darkness of scores sitting on shelves and engraved PDF files sleeping somewhere inside my computer's hard drive.

After three days the piece is flying, still full of the turbulence of the ''new'' but clearly headed for a destination whose contours are in sight and whose nature is becoming increasingly focused. I think we have something.  Something deeply human, profoundly theatrical, and yes, exquisitely beautiful.