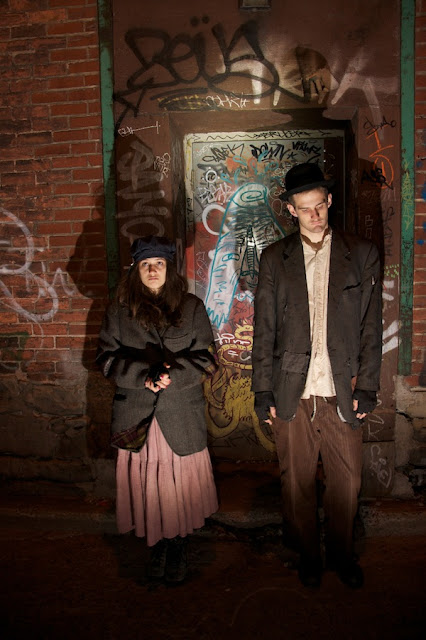 Bang The Old Toy Around
by Caitlin Murphy

You gotta give props to any young theatre company kicking off a season of classics with Beckett’s most angst-ridden modern masterpiece, Waiting for Godot.  And, of course, you have to expect said company – in this case, McGill Player's Theatre –  to want to bang that old toy around and see what else it can do.

In Godot, two unfortunates, Vladimir (Rachel Resnik) and Estragon (Martin Law), desperately try to pass the time as they wait for the elusive Godot.  Momentary diversions from their dull fate – word play, story-telling and the arrival of others –  at least help them maintain “the impression that they exist”.  Not for weak-willed plot-lovers, of course, the play circles, repeats and explicitly addresses its own tedium.  (No coincidence that Vivian Mercer once called it “a play in which nothing happens, twice.”)

In one of Director Isaac Robinson’s playful revisions, Beckett’s minimalist set of “A country road.  A tree,” becomes the brick-walled back alley of a bar.  Godot’s bar, in fact, as the sign on the delivery door tells us.  And though it affords some really fun choices, such a distinct setting also kills the ‘middle of nowhere’ factor that feels so central to our anti-heroes’ predicament.  That said, it was actually the decision to do away with the tree – gestures towards it felt not so much minimalist as confusing and ill-defined – that I found disappointing.


Purists might recoil a bit that Lucky’s famous Act 1 monologue, essentially a tsunami of nonsense, was translated (or rewritten, I wasn’t sure) into French.

In some creative character interpretations, Pozzo (Sebastian Biase) is pimped up in fedora and fur coat, and Lucky (Martin Roy) appears topless, in tight black jean shorts, a smug S&Mer who likes pouting at the audience.  In the most-noted subversion of the text, and one Beckett himself never endorsed, one of our tramps is cast female.  I’m not sure the play or production has anything all that interesting or specific to say about gender, so, to me, this casting felt token.  Not helping matters, I found that Resnik’s performance needed modulation.  Perhaps in an effort to create greater distinction between an animated Didi and a more subdued Estragon, she ended up a little too shrill and shrieky, stomping, flopping and flailing about rather randomly.

If Vladimir needed some reining in though, Pozzo cried out for complete unleashing.  The character’s performed contentment with himself, (“is everybody looking at me?”) felt quite muted in Biase’s delivery, and thus dynamics in the foursome scenes sometimes fell flat.

Purists might recoil a bit that Lucky’s famous Act 1 monologue, essentially a tsunami of nonsense, was translated (or rewritten, I wasn’t sure) into French.  This struck me as a wink at Montreal audiences, but I don’t think it resonated.  Indeed, it’s the moment that felt most like subversion turning into sabotage.  (And for Beckett, who originally wrote the piece in French anyway, I don’t think his interest in language runs that way).

The danger with absurdist drama of course – creating it or watching it – is that it can all start feeling like a free for all; choices can come across as anarchic or cheeky, just for the sake (and fun!) of being so.  But when line delivery becomes a bit too random, the big picture loses its shape.  And as with the piece of KFC chicken Pozzo eats – clearly, for convenience, of the boneless variety –  the skeleton can get forsaken for the ease of the flesh.

Ultimately, I think at the heart of Players' Theatre production of Waiting for Godot is a pulsing interest in theatre’s most enduring debate:  a question of how much the play can do, and how much you need to do with the play.  For the courage of this inquiry, I salute them.