First-Person: Trevor Barrette on To Be 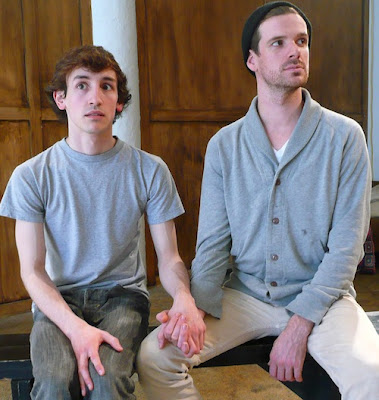 The playwright (l) with Chris Hayes (photo by Pamela Perrotti)

What Does It Mean to Be In Love?
Answers with music
by Trevor Barrette
Set in good old Montreal, 'To Be' is the story of Adam, a young man discovering what it means to be true 'to thine own self.' After toughing through a rough patch with love a friend brings him out to a night on the town, where he, accidentally, falls in love with another man. As this strange, new relationship blossoms, Adam is confronted by the ghosts of his past, the not-so-smooth course that lies ahead and the questions that resound in the lives of the Generation Y: What does it mean to be in love? To be a man? To be gay? And finally, simply, to be?
Every day I would try to come in early, or stay after class, to have some time with the piano and see what else would come of it.

I remember being at school, plunking at the piano, trying to understand how it works. After spending hours trying to get the notes to sound right, I finally managed to get out four chords and a simple melody that would later become the theme for ‘To Be’. Every day I would try to come in early, or stay after class, to have some time with the piano and see what else would come of it. Somehow I knew that I had more to say and that this was how I would learn to say it.
I wrote my first song in the spring of 2009. The song told the story of a guy trying to make sense of himself, the choices that he was making, and the path he was taking in life and in love. He is sitting on a park bench with his boyfriend, who has just confessed that he loves him, and is at a loss for words. He can’t bring himself to say it back and can’t imagine not saying anything at all, but the issue runs deeper. If he says it, it’s one more step towards becoming someone he doesn’t know if he is and, more importantly, may not want to be.  I believe that is when I first encountered the character of Adam. For some reason, I became very interested in the character and have spent the last three years discovering who he is and trying to bring him to life.
Their love became as passionate as Romeo and Juliet’s, their misery and angst as deep as Hamlet’s...

At the time that I was writing ‘To Be’, I was studying Professional Theatre at John Abbott College. Every time I was having trouble writing a scene or developing a character, the answer always seemed to appear right in front of me. And the answer came, mostly, from Shakespeare’s plays, that I would either be reading or see performed. The nuances of his works became clear to me in the context of my characters’ relationships and the poetic nature of his text gave me the confidence to write songs that could be romantic and fantastical, and live in a modern day setting. Shakespeare’s pieces of his that I chose for ‘To Be’ brought the characters and their situations to new, heightened places. Their love became as passionate as Romeo and Juliet’s, their misery and angst as deep as Hamlet’s, and their will as resolute as Lady Macbeth’s. It has been an interesting experiment seeing how the pieces fit together like a puzzle; how in comparing and placing some of his most exciting and celebrated pieces together, adds a whole new dimension to this contemporary story.
In August 2011, I met with Gabrielle Soskin, artistic director of Persephone Productions, and Chris Moore, director of ‘To Be’, at her office to discuss the possibility of producing my play. I had known Chris for maybe two years, and he had heard me go on and on about it and had mentioned that he might be interested in directing it. The meeting ended with them telling me that they were going ahead with the project, and me realizing that that meant I had three months to complete writing the book and begin composing all of the music. I had all the melodies for the lyrics, but had never written a single bar of music before. So I called up my friend Gabriel Frank, who, in passing, once suggested we write a musical together. He contacted his friend Stephan Bradshaw and the three of us began composing and transcribing all 37 original pieces now in the show (within two days, we had come up with almost all the music for the show).
Then, before I knew it, came the fateful, exciting day when the play was handed over to Gabrielle and Christopher.

Throughout the Fall, I planned three successful play-readings where I sat with Gabriel and Stephan at the piano and went through the play and discussed it at length. It was a rewarding and humbling experience. Then, before I knew it, came the fateful, exciting day when the play was handed over to Gabrielle and Christopher. Followed at lightning speed, by the auditions, call backs, singing rehearsals, staging, dancing and countless moments of awe as I saw this three year dream realize before and around me, as I was given the wonderful opportunity and challenge of portraying Adam, the play’s protagonist.
Every day of rehearsal I am moved by the truth and compassion that the actors are bringing to the characters and that the team is bringing to the design and the direction. Now, as I write this and we move into the theatre, I can’t help but remember the time I spent plunking away at the piano three years ago, discovering Adam and the story that now is yearning to be shared with an audience.

To Be by Trevor Barrette is at the Rialto
Read our review of To Be
Posted by THE CHARLEBOIS POST at 3:03 PM