The Upstage Interview: Christopher Moore and Gabrielle Soskin on To Be 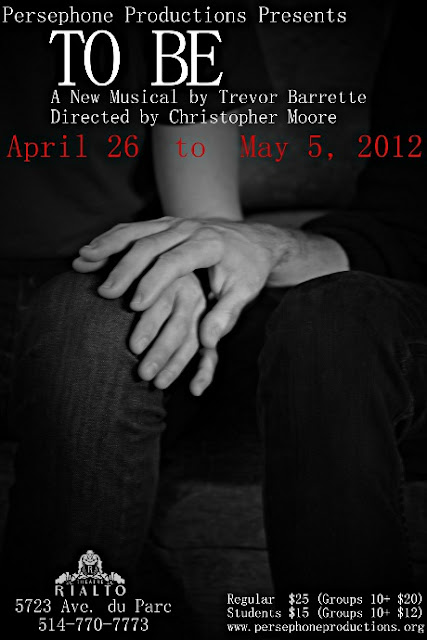 To Be To The World First
Upstage Host Eric Sukhu spoke with Artistic Director Gabrielle Soskin & Director Christopher Moore about Persephone Productions presentation of To Be. Below is an abridged version edited by Estelle Rosen, CharPo Editor-in-chief.
UPSTAGE: Tell us about To Be, I understand it’s a new musical.
GABRIELLE: I was thrilled when Christopher Moore presented me with this script. He asked if I thought Persephone should produce something like this. I read it. I listened to the music. And I said let’s go for it.
It’s a world première. The 3 young men who composed this musical are really admirable. It’s a big and brave undertaking to put together a full length musical with a score, books and lyrics the way they’ve done. It’s also enchanting because Trevor Barrette who wrote the book and lyrics has linked extracts of gems of Shakespearian text as though the heightened language expresses the passion of a love affair between two young men.
...it’s the first time we’ve staged an entirely new work. I’m very proud of that...


UPSTAGE: It’s not often that Persephone Productions puts on world premières?
GABRIELLE: In fact it’s the first time we’ve staged an entirely new work. I’m very proud of that. It’s very important for companies to continue to break new ground so this is an excellent way to do that.
UPSTAGE: With you is Christopher Moore who we know as an actor, now moving into directing. What attracted you to this play?
CHRISTOPHER:  Trevor Barrette had talked about this play a few times. He gave it to me to read.  I liked it. Gabrielle had said to me she thought I should direct  the Spring show. I gave Gabrielle the script to read and asked what she thought. She loved it so much, she wanted to be part of it.  She said she could come in now and then to help.
There’s a number of firsts. The first time Persephone presents original works, first musical, first time another director will be directing for the company, it’s the first time I’ll be directing solo, also first company in Rialto’s new studio space.
UPSTAGE: So what’s going on Gabrielle?
GABRIELLE:  It must be a Renaissance or something. This is a wonderful time  for the company; full of new blood  and enthusiasm. When I came into the rehearsal room after returning from a trip, I was thrilled to be back and see the work and all that was going on.
...there’s something about it that’s still anchored in what Gabrielle has always loved about theatre...

UPSTAGE: When did rehearsals start?
CHRISTOPHER: A few weeks ago. Now that Gabrielle is back from her trip, she’s coming back on to consult. There’s a lot of Shakespeare in the text. There’s something very special about that, something very special about this play. Even though it’s a departure from what Persephone has done in the past, yet there’s something about it that’s still anchored in what Gabrielle has always loved about theatre and what she wanted to present.
GABRIELLE: To me, it’s really a musical about the nature of love and the passion that can be between anyone who loves another whatever their gender. It’s been written with great taste, great sensitivity and dignity in the way Trevor has created the characters.
UPSTAGE: Is this your first time working on a musical Chris?
CHRISTOPHER: I’ve been involved in  a few musicals. I directed Hair Spray last year, also assistant-directed at John Abbott College the year before. I’ve had a little bit of experience but every time the music is always well above my own capabilities. So I’m very glad to have Alana Cosgrove and Shayne Gryn as the vocal director and musical director looking after all musical aspects.
GABRIELLE: They’re doing a fine job. I didn’t know them but I can see in the rehearsal hall how they took  authority with confidence and clarity. When I was their age I was much more dithery than the young are today.
UPSTAGE:   Chris, What’s the difference between working on drama or musical?
CHRISTOPHER: I asked Shayne and Elana to come to the auditions to hear people sing; knowing they would understand the range whereas I wouldn’t.  The songs too, like Shakespeare, require a diffeent form of acting and style.
We all relate to music, whether walking to a beat, or hearing music in our head.


UPSTAGE: What is it about musicals that they remain so popular?
CHRISTOPHER & GABRIELLE:  They’re fun and uplifting, yet can also deliver a message. It’s not just dialogue. Feelings and emotions come across through the music.  We all relate to music, whether walking to a beat, or hearing music in our head.
UPSTAGE: Kudos to you Gabrielle for taking a new direction. Many Artistic Directors tend to stay in the safe zone. This is a risk, but a good risk.
GABRIELLE: I am very proud of that decision.
Company website
Posted by THE CHARLEBOIS POST at 12:01 AM