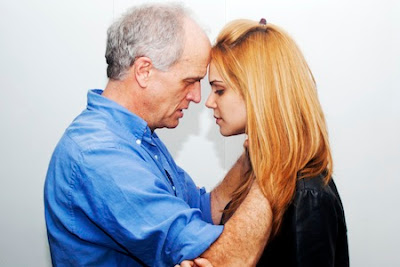 Hey Little Girl, Is Your Daddy Home?
A new company tackles a brutal subject
by Chris Lane
One of the wonderful things about theatre is that it can show new perspectives on topics that are hardly ever talked about. A play can force you to see the world through the eyes of a character far removed from anyone in your own experience. David Harrower's Blackbird presents the topic of statutory rape and allows us to gain insight into the feelings and motives of both characters involved.
The way in which the two characters have been affected by their experience together is particularly interesting...

The play depicts an interaction between two characters, Una and Ray, who had a relationship when she was twelve and he was forty. Ray served time in prison for statutory rape, before changing his name and putting his past far behind him, until Una shows up unexpectedly fifteen years after their time together. The conversation that ensues comprises the entire play, which is a roller coaster of emotions for both characters, complete with shifting power dynamics and numerous revelations about their past and present selves.
Jock MacDonald is strong as Ray, as his portrayal enables the audience to understand Ray, while also showing the numerous cracks in his character. Isabel Farias shows an excellent emotional range as Una, although at times her emotional shifts are abrupt and a bit stiff. She plays Una as somewhat unpredictable and childlike for her age, which reads as a by-product of Una’s experience with Ray. The way in which the two characters have been affected by their experience together is particularly interesting, both in the way they describe their feelings and in their overarching personality traits.
Blackbird is slow to get moving as the uncomfortable moments early in the play lack energy and a clear direction, but after a while it draws you in with the forthright way in which it deals with a controversial subject. Una and Ray are both very round and believable characters, so it is not difficult to spend an evening watching their interaction. While some parts do drag and some of the lines fell flat, the play is an engaging portrayal of how a relationship between a minor and an adult could have taken place, and what long-term repercussions such a relationship can have on both parties. The play does not seem to pass judgment on either of the characters, and the production is careful not to present Una as unequivocally a victim, but it does show how difficult both of their lives became after their illicit relationship. Blackbird is a thought-provoking piece that allows the viewer to draw their own conclusions.
This production of Blackbird is directed by Mikaela Davies and is the inaugural production of Shadowbox Theatre. It is showing at 8 p.m. Wednesday to Sunday until April 22nd at Ateliers Jean Brillant (3520 Rue St-Jacques). 514-262-7309
Posted by THE CHARLEBOIS POST at 3:49 PM