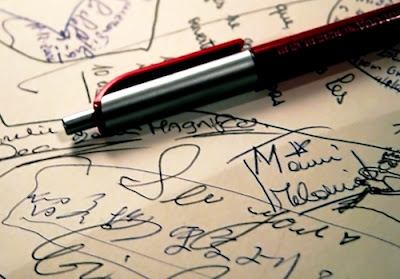 I always knew I would write about it some day but it never found its proper form.
Upstage Contributor Alison Louder spoke with two 2012 graduating playwrights about their plays being presented as part of National Theatre School’s New Words Festival. Below is an abridged version edited by Estelle Rosen, CharPo Editor-in-Chief.
UPSTAGE:  The two plays we’ll be speaking about are The Green Man by Maureen Guailtier and Disappeared by Leah Jane Esau. They seem to have a lot in common but I know from speaking with you before we went on air that they couldn’t have more different routes for the inspiration.
One is semi autobiographical; one is about re-connection and construction of memories. Tell us about how memory and past and searching for the imminent future informed your writing.
MAUREEN:  I guess what’s really awesome about theatre is that you can jump back and forth in time. The piece I’m working on is all about family; how stories get passed on from generation to generation, and how we use stories to organize our lives in an effort to make sense of senseless things that happen to us. I think it’s a very human thing to have to deal with and really interesting  to consider in a theatrical idiom.
He’s helped along on this journey by remembering a story his grandfather told  him when he was young.

UPSTAGE: I understand you have a character with a brain tumour, a character with quests, a character with attitude problems, a story about the king of trees. Tell us a little bit about what the journey is going to be like.
MAUREEN: The story is about  a character named Dan, he’s a young cancer researcher. His girlfriend Rosa learns early in the play she has a brain tumour. Over the course of the play, Dan has to deal with this information and  find a way to save her. He’s trusted in science his entire life to know the answers; now he has to trust in faith. He’s helped along on this journey by remembering a story his grandfather told  him when he was young.
The story was about  the king of the trees and the myth of how this tree king can help save one’s true love.  The story grew out of experiences his grandfather had in his childhood in Poland in WW II. Dan has to cast aside his need for certainty and start believing in something that he really has no idea what it is.
UPSTAGE:  As you say, it’s about finding meaning in something that can’t be explained. Did anything specific lead you to explore that?
MAUREEN: The germ of this play happened about 5 years ago. My girlfriend’s boyfriend of 5 years collapsed and died of a heart condition that no one knew he had. He was a cancer researcher. Everyone in his circle was dealing with how could this happen –  he was an amazing person - he spent his professional life trying to cure cancer.
I always knew I would write about it some day but it never found its proper form. It got to a point where I felt I was emotionally ready. Finding this mythology to put on top of it allowed me to write it. From there extrapolated the idea we have to tell each other stories in order to say what we have to about the terrible things that happen to us as human beings
In every character’s story there is someone who is missing

UPSTAGE: It must have been a very intense experience holding on to it and discovering process throughout your learning experience.
I feel there are common threads between The Green Man and Disappeared but at the same time the story couldn’t be more different. Tell us about Disappeared.
LEAH:  In every character’s story there is someone who is missing, who has disappeared, literally not there. For example there’s a man with Alzheimers so he can only remember certain parts of his memory; he’s in the process of  disappearing. There are young people who can’t express themselves so in a way they are disappearing.
At the heart of the story is two sisters who have been separated for 10 years and who re-connect.  Something happened, they each have their own opinion and memory of what happened. When they come together, their memories clash. So it’s about a constructed memory. How the past affects us in the future can be a weight on our shoulders. How do we learn to overcome them; how do we learn to connect with each other is a lot of what I’m trying to show.
UPSTAGE: I like this quote from your play “all  I could think was I recognize the chin, the face, this is one of the most familiar faces but I don’t know this man at all.” In some way we can all relate to that. It’s one of the conundrums of being human. We think we know someone and we really don’t.
LEAH:  That made up identity we’ve made up in our heads may not be the truth.
I know who he is on a physcal level but I don’t know who he is.

UPSTAGE: Who is that man?
LEAH: The younger sister has just seen her father’s dead body and she’s been asked to identify him.  She says I saw a dead body and I don’t recognize that man. I know who he is on a physcal level but I don’t know who he is. That’s her journey,
UPSTAGE: What about the exploration behind sisterhood and solidarity between women.  That in itself is a powerful theme. Seems like there’s a lot of conflict between the sisters.
LEAH: Totally. I’m part of a very close tight knit family and sometimes I explore how much I would miss my siblings iif I didn’t have that relationship with them.
In the story, the older sister has run away; tried to escape the past, and has abandoned them. The younger sister has identified the body; she has her sister’s address; basically it’s all abut re-connecting with her sister; the desire to talk with and be loved by her sister.
UPSTAGE: You’ve been workshopping these scripts for over a year. What’s that experience been like?
MAUREEN: We had an opportunity to have our in-progress pieces read by the actors who would eventually be playing the parts. They switched around because we didn’t know how the casting would end up. It was a very informative experience.
It’s a completely different beast from sitting alone in your room typing up words. Hearing actors saying them makes it come alive in a totally different way.
See the website
Posted by THE CHARLEBOIS POST at 12:00 AM