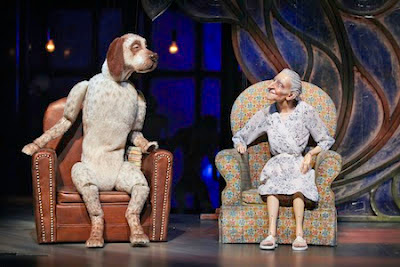 WICKED SCENES FROM THE END OF THE WORLD
Montrealers are lucky that their city is where Penny Plain is finishing it’s cross-country tour.
joel fishbane
A tour-de-force constructed out of wood and string, Ronnie Burkett’s Penny Plain is the must see show of Montreal’s Spring season. Burkett, who has gained international acclaim with his Theatre of Marionettes, has again hit the ground running with a show that is at once prophetic, heart-wrenching and delightfully absurd. Such is his skill that at the curtain call, it seemed a crime that the marionettes didn’t take a bow: they seemed as real as any cast of humans.
Penny attempts to meet death with dignity even as her various tenants grapple with the Apocalypse in their own distinct ways.

As the lights fade, it becomes clear we’re in the not-too-distant future. The world has come to an abrupt end thanks to several calamities, none of which are of any concern to old landlady Penny Plain – her biggest problem is the departure of her companion Jeffery, a talking dog with dreams of grandeur. Left alone in a world that’s on its way down, Penny attempts to meet death with dignity even as her various tenants grapple with the Apocalypse in their own distinct ways.
It’s a generally plotless narrative, but that doesn’t mean its ever dull. Burkett is obsessive when it comes to his scripts and his attention to story shines through. Penny Plain has several plot threads and over a dozen characters, all of which Burkett manages to weave together with enviable ease. His cast is at once demented and familiar: Pinocchio makes an appearance as does a woman who is desperate to go to any lengths to make a baby (literally). This glimpse into the end of days isn’t always pretty but it reveals an intuitive understanding of the complexities of human nature: even at the end, we never stop hoping for a new beginning.
Montrealers are lucky that their city is where Penny Plain is finishing its cross-country tour. Burkett has had time to hone his performance so that every moment is pitch-perfect: he plays all the parts and often delivers exquisitely-timed vaudevillian routines entirely with himself. His skill is that of a concert pianist, manipulating his characters with perfect dexterity so that none of them ever get tangled in each other’s strings. Some of his voices may sound a bit similar but even then we are never at a loss as to which character is speaking.
Nor does he skimp on the details: Penny Plain wearily slumps in her chair and a newborn puppet baby wriggles in his Mother’s arms. What is astonishing about Burkett’s theatre is the way he succeeds in making us forget he’s on stage: like the best sort of magician, he makes us forget that any magic is being done at all. In designing the puppets, Burkett has given them all exquisite detail, from forehead wrinkles to the glow on a young girl’s cheeks.
Penny Plain is playing at the Cinquième Salle of Place des Arts and in many ways it is ill-served by the room, which feels slightly too large for what ends up being an intimate experience. The front row is usually a dangerous place to sit, but in this case you’re best served to put yourself as close as you can. Just make sure that you’re sitting somewhere: to miss this show would be to miss theatre at its best and a chance to watch an artist at the pinnacle of his craft.
Penny Plain by Ronnie Burkett runs at Cinquième Salle, Place des Arts from April 12 – 21, 2012. For tickets call 514.842.2112 or visit laplacedesarts.com.
Read Joel Fishbane's interview with Ronnie Burkett
Read Dave Ross's Toronto review of Penny Plain
Read Jim Murchison's Ottawa review of Penny Plain
Posted by THE CHARLEBOIS POST at 3:06 PM