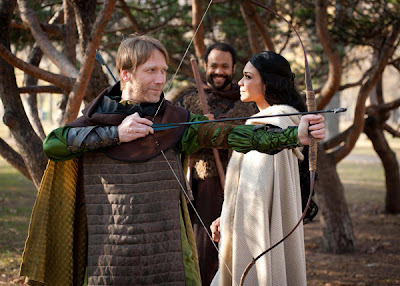 Legends and folklore are manna for tellers of children’s tales. Since we understand that any facts in their narratives and characters are stretched at best, at worst, entirely made-up, and often appropriated from whatever influences were blowing in the wind through which the last teller told them, the stories that are passed to us through books, place names and ballads continue to resonate with us throughout the centuries precisely because of, and not despite, the circuitous telephone game involved in their relaying.

There are lots of bits to Robin Hood. Since this is not a story that is passed down to us with a clear beginning, middle, and end, but more in bits and pieces gathered from rituals, songs and tradition, like a Pantomime, there are a couple of basic elements necessary to make it recognizable: We’ll need bows and arrows, trees, a merry band of misfits, a puckish rogue, and an evil sheriff bent on ruthlessly suppressing the peasantry. That’s it. The rest is just detail, bits and pieces added on and altered over the course of the near millenia that this hero has been a part of western consciousness. The moor, the maid, the King, the Friar, the Crusades, the details of Robin’s noble bloodline,  are all elements that have been woven into the tale at different times in order to make it appeal to the audience to which it was presented. It is in these details that director Dean Fleming and playwright Paula Wing bring the tale of this Prince of Thieves, this Man in Tights, to the urban, 21st century stage.


If Geordie’s production of Robin Hood has one fault, it may be that it’s too rich.

There are a lot of named characters that audiences will recognize in this story. Maid Marian, Little John, Friar Tuck, Will Scarlett, Guy of Guisborne, the Sherrif of Nottingham, Richard the Lionheart, among others. There is also a lot of story. As is the way with these meandering legends, the challenge of cramming as much of the story and its beloved characters into an hour long family-friendly running time is tackled creatively by Geordie Productions, surprisingly, not by eliminating characters, so much as by combining them. There really is no reason for meanies Guisborne and the Sherrif not to be one and the same, and so they are. In this version, we never meet an Azeem, Moorish protector and great figure of loyalty and friendship, but, in keeping with Geordie’s tradition of diverse casting, we find Azeem’s important qualities divvied up between Robin Hood’s fiercest ally Little John (Matthew Kabwe) and the object of his desires, Maid Marian (Tamara Brown).

If Geordie’s production of Robin Hood has one fault, it may be that it’s too rich. We spend so much time watching Marian grapple with the world’s inability to see past her beauty, that we don’t see very much of her ass kicking. We spend much time on Midge’s cunning and little on her compassion. We are treated to such political jargon from the Sheriff of Nottingham and Prince John about kings, yeomans and wars, on power struggles and keeping the peasants down, that we don’t get to see precisely how the Merry Men are grouping together to form a community of their own. While we are treated to notions of Hood’s men working towards a better world for all, as an audience, we witness very little stealing from the rich or giving to the poor, while we are treated to truly delicious relationships and their development throughout the course of the piece.

In another contemporizing twist, Wing adds to the depth and complexity of the Robin Hood legend by introducing new characters not otherwise part of the tale we know and love. Midge, the miller’s daughter, and Eleanor of Aquitaine, queen to Richard the Lionheart, stand out among these as bringing a new feminine perspective to what was once exclusively a tale of the wacky adventures of, well, Merry Men. Pixar’s Brave brought us Merida, whetting the appetite of today’s young girls for medieval female characters who can kick some ass, and Geordie’s Robin Hood follows suit, introducing us to three women who each kick ass in their own way. Queen Eleanor rules with uncompromising  ascendancy in the absence of her husband, and much to the dismay of her petulant son Prince John, stands her ground. Midge, plucky but plain, wields her sword and smarts with aplomb, yet goes unnoticed in her peasantry. Marian, on the other hand, an accomplished herbalist and swordsman, has her talents overshadowed by her stunning beauty. The challenges faced by these women are those faced by women and girls even centuries later; to define ourselves by ourselves, not by our looks or the men in our lives, but on our passions and the ferocity with which we pursue them.

Robin Hood continues to December 16
Posted by THE CHARLEBOIS POST at 4:31 PM