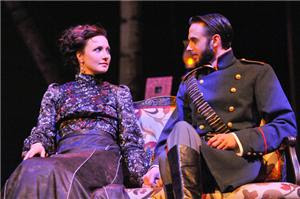 Anton Chekhov, that titan of dramatic literature, once ventured that “Any idiot can face a crisis – it’s day to day living that wears you out.”  A master at highlighting the irksome paradoxes of human existence, Chekhov wrote about themes that aren’t only universal but boast a damn decent shelf-life.  Though the National Theatre School’s graduating class’ production of Three Sisters often gets weighed down in the playwright’s less contemporary appeal, the company still rallies to find the play’s resonance.

Directed by Vikki Anderson, and presented at the beautiful Monument National, Three Sisters is about Olga, Masha and Irina, who, in the opening scene, are lamenting the first anniversary of their father’s death.  Quickly we are introduced to the women’s all-consuming desire to return to Moscow – the home of their youth, and the mecca of meaningful, sophisticated and satisfying life.  In the meantime, they toil away in their dull little town, living on promise, and diverting themselves with jovial visits from locally stationed soldiers.


“We are never happy; we can never be happy.  We only want to be happy.”

Dreams of Moscow, of course, beautifully stand in for any human longing, and the confusions that desire breeds in us.  Chekhov deeply understood how we woefully misinterpret our potential for happiness; as one character reveals:  “We are never happy; we can never be happy.  We only want to be happy.”  The play muses on why our lives seem to always unfold in the very directions we most wish to avoid.  Stylistically, Chekhov’s writing is much more heavily expository than contemporary audiences are accustomed to, and the dialogue is quite declarative in nature:  weeping women tell us they are sad, family members inform each other of where they work or when their father died, and tired people describe in extended detail how very, very, very tired they are.

Of course in student productions – since much of the point is training, experience and exposure – there are always some encumbrances of casting.  Numerous complaints from characters about looking old, growing fat, and so forth, come from actors who are clearly doing no such thing.  Disbelief must be suspended in such circumstances, but it’s rarely high enough to be out of view.  Stand out performances include Shannon Currie as Masha (who I noticed in the program appears courtesy of Equity, so if she’s indeed still a student, she’s already a card-carrying one!).  Currie beautifully conveys Masha’s crippling ennui and deep-seated resentments.  Adrian Shepherd-Gawinski also delivers in an impressive double turn as the painfully ineffectual, yet awkwardly charming, Kulygin and the volatile Solyony.  Much of the delivery in other performances was rather flat, lacking nuance; paired with Chekhov’s declarative and earnest dialogue an undesired distancing effect was sometimes created.

The multi-leveled set, fitted with elegant furniture and grand piano, provided a dynamic and effective playing area for the 11 member company.  Projections, abstract images of ice and fire, slice eerily into the background.  Birch trees at all angles, stunningly pierce through and support a raised area of the set (unused until Act 2, but always hovering intriguingly above).  A double entrance at stage right struck me as the only false note; aesthetically, the whole area was rather unintegrated; a choice that was perhaps intentional, but not intentional enough.  It recalled a dimly-lit dressing room area of a sketchy clothing store.

In the play’s final scene, the sisters searchingly debate the purpose of life’s suffering, the value of existence.  Olga answers with a plaintive and unsatisfying refrain: “If only we knew.”  At the same time as the audience nods in sympathy with her wish, we accept that there is likely nothing to be known, or at least nothing that would make the difficult day-to-day any easier.  Parodox well-played.

Three Sisters continues to December 15
Posted by THE CHARLEBOIS POST at 4:40 PM