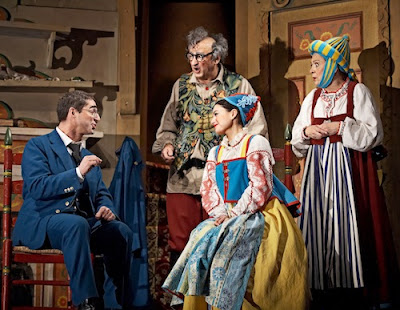 Un village de fous, the adapted and translated take on American playwright Neil Simon’s 1981 play Fools, tells the story of the village of Kulyenchikov and its inhabitants who have been cursed with the plight of ignorance and stupidity for 200 years.

Though it was initially difficult to get into the story and its characters - namely Antoine Durand’s performance as Léon Tolchinsky, the new professor in town who is determined to release the villageois from their curse after falling in love with Sophia Zubritzky, played by Émilie Bibeau - the play’s entertainment value grew as the piece progressed.

Un village de fous became especially engaging once actor Luc Bourgeois, playing count Yousekevitch, entered the scene. His comedic timing and physicality had the audience roaring with laughter and even applauding after a particularly funny scene was played out. Another standout comedic performance came from Pauline Martin who played Lenya Zubrtizky, the mother of Sophia. Martin’s facial expressions alone were sufficient enough to provoke loud laughter from the Théâtre Duceppe audience. Bibeau’s performance was also noteworthy, especially her ability to shriek with timing so perfect that it startled the audience every time.

Overall, the well-chosen cast proved to play off of each other well, making for a very solid performance.  Un village de fous turned out to be a highly pleasurable experience that made for a great night out at the theatre.

Village de fous continues to February 9
Posted by THE CHARLEBOIS POST at 2:32 PM