Blog: Johanna Nutter and the Journey of My Pregnant Brother (Part XI)

Fourteen
The last time I saw Yesca  was eighteen years ago. She was living in West Hollywood and we jumped into her pool with all our clothes on and then took her Great Dane, Saucy, to The Burger That Ate L.A., dripping wet and giggling like mad. So, it was only fitting that when she met me at Embudo Station, where she’s been ever since, we should jump into the Rio Grande with all our clothes on. 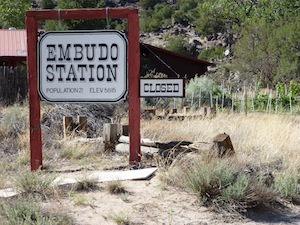 If you’ll look closely, you’ll see that the population of Embudo Station is 21. Apparently, that’s including the coyotes. There used to be a train running through here called the chili line, because its main haul was hot peppers. No one lives right at the station, though; they all live up this crazy road (that we won’t tell Enterprise I drove their Corolla up, kay?) on the mesa. 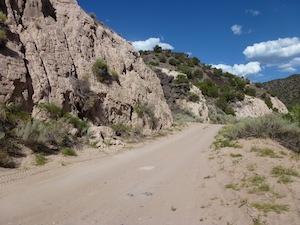 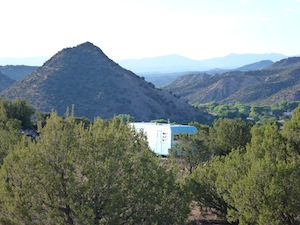 The mesa is a family affair. Yesca lives in the house that her ex-husband Ralph had been in the process of building for the eighteen years they lived there together. Now he lives further along the road with his dog, Gina. He’s kind of a jerk. At least I think so. He was never very nice to Yesca. But, together they had two beautiful children; Sascha and Brooklynn. That little blue trailer you can see in the photo is where they lived when Sascha was born. Just around the bend from that is where her father, Patrick, shares his home with Cornelia, a Hungarian linguist and beautiful soul. Up from that is the home of Yesca’s sister Spirit, her ‘baby man’ Philip, and their lovely daughter Sienna. Philip and Sascha, both avid long-boarders, have a skate company together, and Patrick is teaching Yesca everything he knows about growing plants on the mesa. Spirit can catch rattlesnakes with nothing more than a Bo-Peep hook. 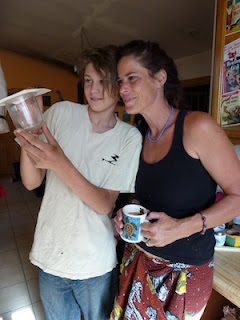 I took this picture the morning after I arrived. Yesca with her son Sascha, all grown up; he just caught a wolf spider. Yesca loves spiders. She always has. When we were fifteen, she was the only girl I knew with a tattoo: a spider on her left shoulder.
I’m glad I took this picture. This was most likely their last morning together on the mesa for a long time. After spending their whole lives in this one spot, the family was moving down to Taos. A quarter of a century after they first met, Yesca and her first love had finally entwined. I remember how she used to pine over Mike when she’d come back from her summers in Taos… he was ‘the one’. But he was quite a bit older than her and wouldn’t give in to her desires. Well, after living parallel lives for a couple of decades: both escaping bad marriages, both becoming the main parental force for two children, Mike finally said yes. 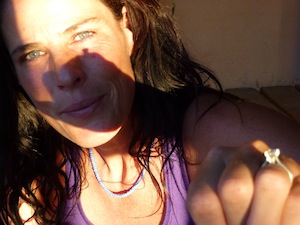 So, we spent the day moving mattresses and other essentials down the hill. Stopping for the totally necessary dip in the river along the way… 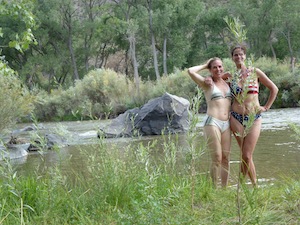 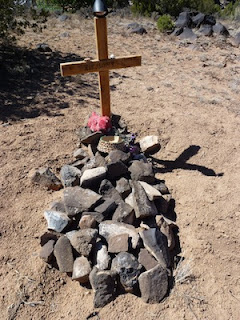 I was so glad that I could be there to help out. Unlike Yesca’s kids, I have moved so many times I couldn’t even count them all. I am an expert at change and they were going through so much change all at once. Leaving the only home they’d ever known, going from a family of three to a family of six, and all this following closely on the heels of the loss of their beloved Curry, who had finally succumbed to old age.
Of course, the mesa isn’t going anywhere. And neither are the rest of the Sullivans. No sooner had we got the beds set up at the new house when we headed straight back up the hill to celebrate Yesca’s birthday. Everybody was there, including Mike and his boys, and Erin, Yesca’s Mum, a world-traveler and much sought-after astrologer.  We had a wonderful meal of spaghetti and meatballs, finished off with a spider-web birthday cake, and the opening of gifts, all in the new solarium Patrick and Cornelia had added on to the front of the house. 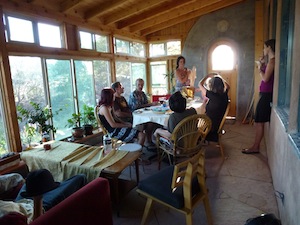 Yesca had told me that she really regretted not being at the show with Jen and Lisa et al for opening night, so I told her that if she wanted me to, I would do it for her and her family as a birthday gift. She wanted me to. So, after dinner, we moved the tables out of the solarium and I stood there in front of them and opened my mouth to start my story. But nothing came out. I was struck by how much emotion was in that room that I was personally aware of. It was like it went into me and got stuck somewhere in my throat. So I burst into tears, which turned into laughter, and then the story came through at last. 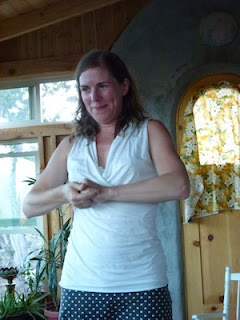 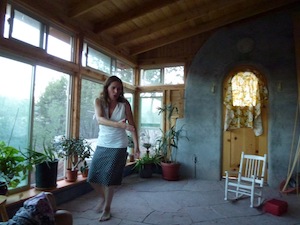 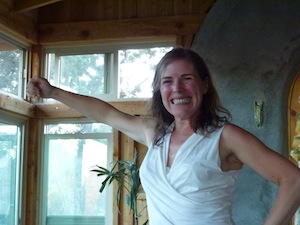 I think that show may have been the best one yet. Everyone was right there—I could literally reach out and touch them—and they were smiling these big smiles, and it felt so… reciprocal. I knew I was giving them something of value, something that might even be healing in some way, and they were giving me the love and support to go as deeply into this journey of mine as I possibly could. We made magic on the mesa, all of us, together. It was like we were all the same person, in a way. All with the same core, wanting the same things. Brooklynn missing her dog, fighting change; Yesca, still the beautiful awkward teenager who hung out with my little sister because she felt like she was one of the few people who didn’t judge her; my niece, Erin, my mum, me, all of us little girls. We’re all the same. 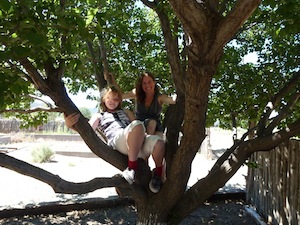 All right. The old hippie vibe is becoming a little too much for me. All this peace and love. Sheesh. Time to move on. I’m putting on my shirt and shoes: Utah here I come…
Posted by THE CHARLEBOIS POST at 5:17 PM