If you're anything like me, you believe that Hamlet is best enjoyed while enjoying a plate of ham. Same goes for a dish of duck during The Wild Duck and some cucumber sandwiches to munch alongside Algernon in Earnest.
I've seen it all and eaten it all while seeing it, so I can tell you that theatres generally frown upon eating during performances, with the exception of these five theatre-friendly meals...


1. Plastic Bag Full of Individually Wrapped Hard Candies
We've all been to a show where one actor, for whatever reason, is too quiet. It would be rude to yell "speak up!" or "project, damn you!" during the performance, so I have devised a polite alternative: noisily unwrap your candies while the quiet actor is delivering their lines, thus forcing them to raise their volume over that of your bonbon brouhaha. 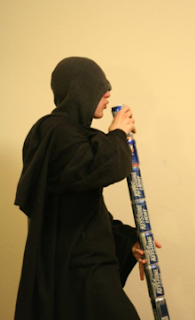 2. Six-Pack of Canned Beers, Duct Tape and a Screwdriver.
The only thing better than live theatre is watching live theatre when you're hammered.

Using canned beer is important, because you're going to want to shotgun those puppies to get juiced right quick (use your screwdriver to puncture the cans).

Then you're going to want to make a Wizard's Staff with the empties, and climb onstage to challenge Prospero to a Wizard War or whatever you call it. Sorcerer Squabble. Magical Melee. You know what I'm talking about.

3. Delivery Pizza
Give the pizza place the name of the theatre and your seat number, sit back, and relax. Just when the show starts to get boring, the delivery guy will burst in and bring you a hot round pie of renewed interest.

Pro Tip: Make sure to leave your cellphone on in case the pizza guy has trouble finding you in the dark.

4. Microwave Dinner
Buy three side-by-side seats, one for your microwave, one for you, and one for your portable generator. Microwave dinners are convenient because they only take around three minutes to cook, and the microwave will screech out an ear-splitting series of beeps to snap you out of the show and back into what's really important: mid-theatre salisbury steak.

5. Rotten Fruit Salad
This isn't for you, it's for the hardworking actors who have toiled for weeks to create a show expressly designed to entertain you.

If it sucks, pelt those sappy starlets with mouldy tomatoes and make them wish they went to business school.

In conclusion, if you don't eat you'll die. And the first thing they teach you in theatre school is that if the audience dies, theatre dies.

So keep yourself alive by eating during shows, and the next time you hear some sloppy slurping somewhere in the dark, know that I'll be there, keeping theatre alive right alongside you.

Email ThisBlogThis!Share to TwitterShare to FacebookShare to Pinterest
Labels: Friday Five, Matt and Kyle and Matt