Blog: Johanna Nutter and the Journey of My Pregnant Brother (Part XIV) 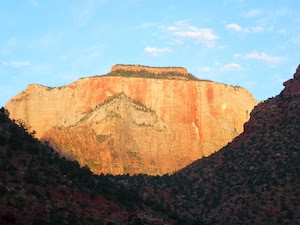 Seventeen
Zion National Park is the greatest place in the world. I don’t know what else to say, really. I just spent three of the most wonderful days here, rediscovering this glorious ball of water and earth on which I breathe and move and feel and eat and drink and sleep. From the first glimpse of the morning light on the sandstone, with the iPod shuffling miraculously into Lauren Hill’s Everything is Everything, I knew why I had to come to Zion. 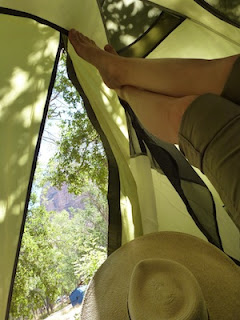 I needed a rest. I’ve been working for a long time without taking a real break. It has felt as though someone finally fired the gun at the start of this track I’ve been on for the past few years and I’ve been racing around it nonstop, trying to beat my own best time. Until now…
It’s nice to be back in a tent. I lived in a tent for a while growing up. I remember one winter, somewhere in Florida, Mum and I had pitched the tent in a farmer’s field and when we woke up in the morning, the tent walls were strangely dark and saggy. I zipped open the door and drew back the thin flap of fabric onto a totally white world. That became what Floridians still refer to as “The Great Snow of ‘77”. No danger of that here. It’s about a hundred and something degrees. I lucked out; the only campsite left with shade was vacated five minutes before I arrived. My neighbours, two guys from New York, welcome me to the ‘hood. Just down the path, an entire Mexican village has set up camp and people are singing, laughing, and cooking. I think I’m gonna like it here. 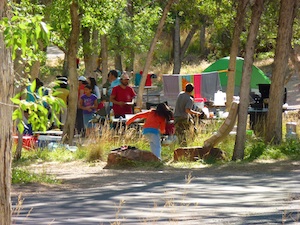 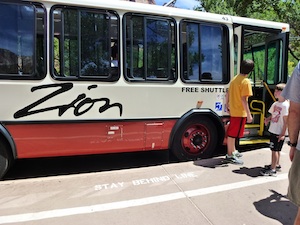 Vehicles are not allowed up the canyon road. I think that’s one of the main things that make this place so special. Take away the cars and the stress levels all but disappear. There are these lovely shuttle buses that are free to hop onto, with one passing by every five minutes or so. Plus, they say ZION on them. My first stop was the grotto; starting point for the Weeping Rock Trail and the Hidden Canyon Trail. The first trail was listed as an easy hike, and as pretty as it was, the ease meant there was quite a crowd when I got there. I was glad to see that I was alone when I started up the hill towards the Hidden Canyon, officially labeled as strenuous. I don’t know exactly what did it: maybe it was the heat, or the altitude, or the fact that I didn’t die, but by the time I made it to the top of the trail, I was cured. Of every nagging little ache and pain. Nothing mattered anymore except for whatever I could see, smell, and hear right around me. I found a sunny spot with a little pool and spent the better part of an hour watching a monarch butterfly open and close its wings. 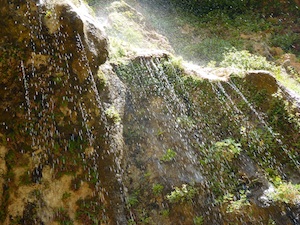 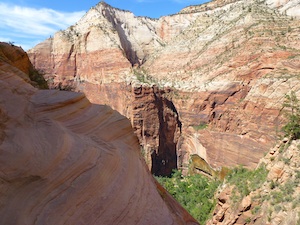 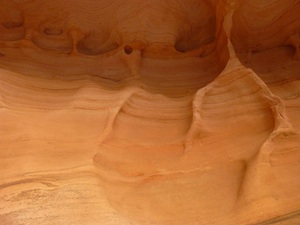 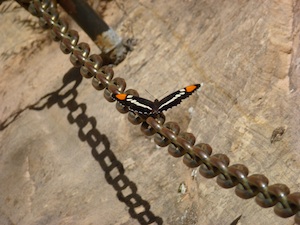 I basically floated down the mountain and into the town of Springdale for supplies. In Sol Market, my ears picked up Joni Mitchell singing California, which is the first song on the My Pregnant Brother preshow playlist. I looked up and there was a sign over the ice cream counter that made me laugh out loud. Jeremy Taylor, what do you think of that? 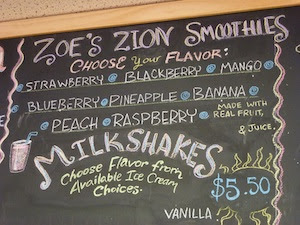 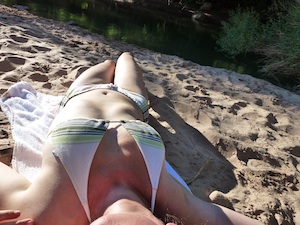 On the way back from the store, walking along the riverbank, I noticed a few kids in the water. I remembered what I’d heard from the recorded tour guide on the shuttle bus, about the Virgin River water originating high in the mountains at Navaho Lake, and about it being some of the purest water there is. I dropped off my supplies and headed down to the river. I found this really sweet spot and spent a few more hours alternating between floating downstream and lying in the sun. 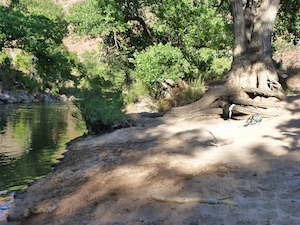 At sunset, I went for another walk up the Watchman Trail, just behind the campground. I sat down on a rock and watched night come to the canyon. It was great theatre. Especially the finale: a slow-motion ten-minute moonrise. Full moon in Zion. 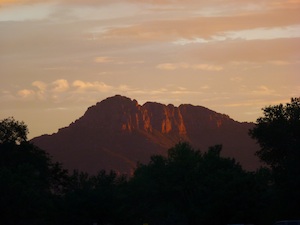 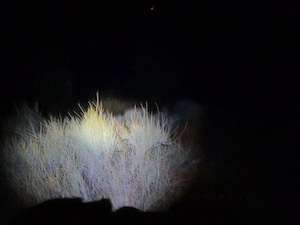 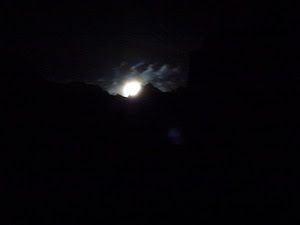 There was a sign on the road to Zion that called it “The Greatest Earth on Show”. Well, it was. I couldn’t take my eyes off it. For the next two days, the show just got better and better. Zion is so named because early settlers interpreted the old Hebrew word to mean “refuge” or “sanctuary”…and that’s what it was for me. I felt like I had come out of the trenches and been treated to a fantasy. Only, it wasn’t. It was very real. That fox playing with the two fawns, who stopped his game to come and pose for me, he was real. And so were the emerald pools and the blue sky, and the sweet sweet smell of the sagebrush, wafting over the canyon. All of it; wonderfully real. 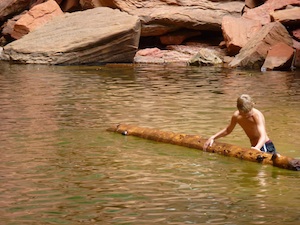 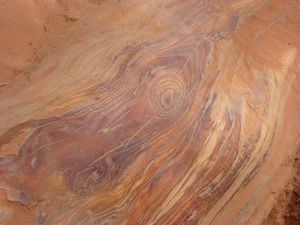 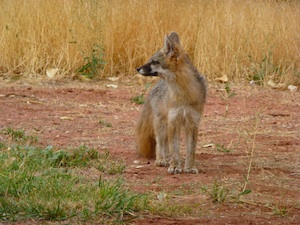 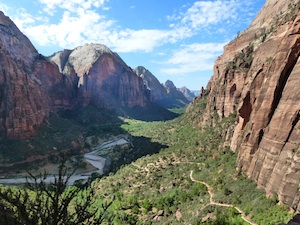 This morning, I woke up in time to catch the setting of the moon. I took the shuttle to the grotto one more time, to begin the hike up to Angel’s Landing. It is so named because one of the park’s early managers felt that the monolithic peak was so impossible to scale that only angels could experience it.  But he and his employees forged a trail to the top anyway. It’s not for the faint of heart: at one point, I was picking my way across a ridge that was just wide enough for two people to pass each other, if one crouched down in a little ball, with sheer drop offs on either side that turned the shuttle buses into ants on the canyon floor below. 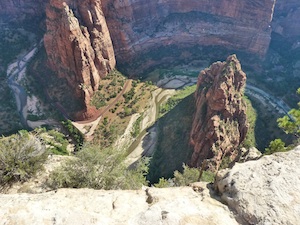 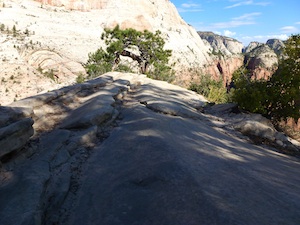 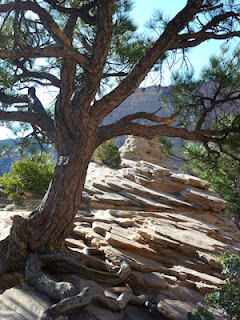 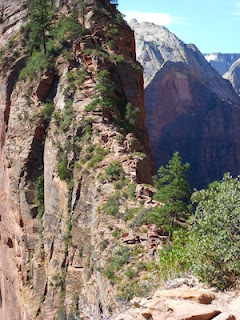 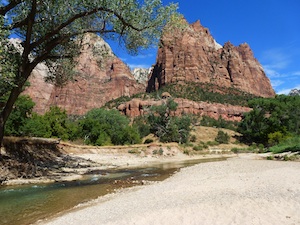 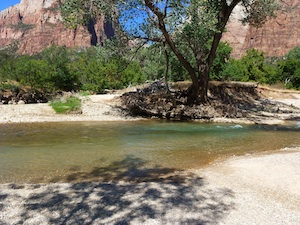 On the way back, I stopped off at the Court of the Patriarchs: three peaks named Abraham, Isaac, and Jacob. There is just a small trail leaving from here, up to a little plateau where you can go and try to fit all three papas in your viewfinder. I had an inkling that because of its low status on the hike metre, it might be less populated. I was right. In fact, I had the whole place to myself for the hour or so I spent swimming in the river by this amazing tree. I thought about the legacies left by all the people in this canyon: the nomadic tribes who farmed the banks of the river, the early settlers who tried to weather the harsh conditions, all the rangers and managers who made and maintain the trails and rebuild the roads after the yearly swells of the mighty virgin tear it to shreds. All the effort that goes into cultivating this sanctuary, this show of breadth and depth…I wondered about my own legacy: what impressions will I leave on this earth?   Being an actor and a writer, my offerings seem to be more emotional than physical. But I am learning so much about my craft from these rocks: how the strongest and most profound effect I can have on someone is by being everything that I am and understanding the legacies, all the upheavals and journeys and pressures, that constitute this person I have been shaped into. And then, to be open to people discovering those formations, not by trying to show them off, but by simply inhabiting them.

I have to leave Zion now. I don’t want to. I want to stay for a few days (Weeks! Months!) more. I am stopping off at the visitor centre to turn my temporary pass into a yearly one. I am coming back as soon as I can. I have learned so much being here and my thirst for more of this knowledge is unquenched. I’m coming back to pitch my tent just as soon as I possibly can. Beautiful, beautiful Zion. Who wants to come with me? 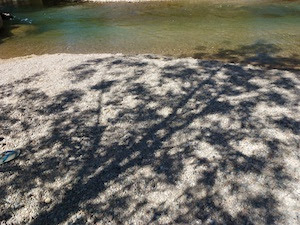