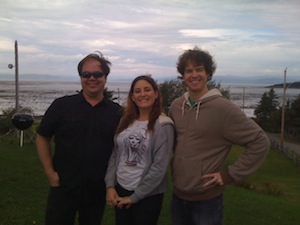 Here we are, about to embark on a new adventure. Nerves are going and excitement is in the air. Bags have been packed, last minute errands are being run, goodbyes are being said and it is safe to say the next few hours will be spent trying to figure out how to fit everything into the little Ford Focus that could…
This is Beyond the Mountain Productions’ first show since its launch this past July, although not its first project. Earlier this month Danielle (our artistic director) had a very successful visit to Minneapolis for the 2011 Minnesota fringe festival. She spoke a lot about the company, established great relationships and found wonderful shows to bring to Montreal in future seasons.
As I was looking at the schedule, I noticed that approximately half of the shows produced in the festival are from out of town including multiple shows coming from Europe.


This year should be a very interesting one to participate in the Atlantic Fringe Festival due to the controversy surrounding it, and when I say the word participate, I don’t meant it lightly. In addition to producing Paradise Lost, Beyond the Mountain Productions will be reviewing other participating shows on our blog. As I was looking at the schedule, I noticed that approximately half of the shows produced in the festival are from out of town including multiple shows coming from Europe.
With the exception of Paul Van Dyck, neither one of us has been to Halifax so this adds to the adventure. Luckily we’ve already traveled together so we know we can handle each other for hours on end in one car. Going back to New York City this winter will feel like a breeze compared to the fourteen hours it takes to drive to Halifax. Our first stop will be Monday night in Kamouraska, Quebec where Danielle’s country house is located, and since she is unable to accompany us all the way to Nova Scotia, it will be nice to spend a night together, just the four of us and “break bread”.
Paradise Lost will be performing four shows at the DanSpace in Halifax and two at the Neptune Studio toward the end of the festival. Those are a lot of seats to fill so for all of those readers who are in Halifax or know anyone in Halifax, let everyone know about Paradise Lost. What better way is there to spend fifty-five minutes in Halifax than watching an award winning show that has puppets, original CGI animations by Jeremy Eliosoff, beautiful lights by Jody Burkholder and Paul Van Dyck performing the greatest epic poem ever written?
Please note that our IndieGogo campaign is still running and accessible through our website for those who wish to help us get to NYC next year. Every little bit helps!
Posted by THE CHARLEBOIS POST at 5:46 PM

Email ThisBlogThis!Share to TwitterShare to FacebookShare to Pinterest
Labels: Beyond the Mountain, Blog