First-Person: Iris Lapid on the return of MAP 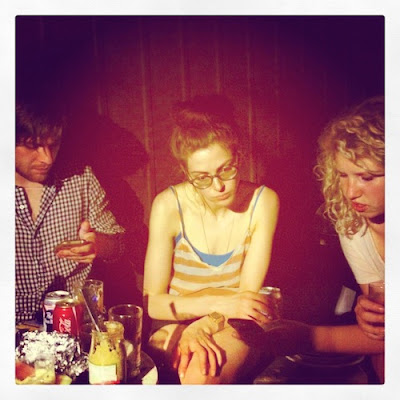 Pencil Shavings and the Fat Vogue...then Phaedra
by Iris Lapid

Although I have been out of school for two and a half years now, I think I will always associate September with new Beginnings. Something about the smell of pencil shavings and the extra big edition of Vogue always fills me with anticipation. Well, It's officially autumn, I've turned the heat on in my apartment, and MAP is back in rehearsal!

Last season The MAP Project fused Theatre with Reality TV to bring a monthly episodic serial to MainLine Theatre's Mini-Main. Throughout the eight episode arc, Season One followed the lives of three Montreal actors and their crass alter ego personas. MAP, however,  has long been known more for its form than its content. The project began several years ago when we decided to introduce a camera into our social gatherings; the genesis of the project was taking verbatim scripts from our lives and finding ways to stage them.


No more cameras? No more verbatim? You'll have to come to find out!

It's a new year, and a new Season, in both senses of the word. Here are the major changes:
Which leads me to the show itself: Season Two, Part One - Play it Again, Phaedra. MAP has shrunk sizeably from last season to now; we lost an actor to the wiles of Toronto, and a director to the...to Calgary (temporarily!). Working with a company of three has been an intimate experience. One director, two actors. It has lent itself well to tackle some well-trodden ground: love, intimacy, addiction, obsession. We began our exploration by reading two scripts: Phaedra by Jean Racine (a re-telling of the original myth written by Euripides), and Phaedra's Love by Sarah Kane. The Phaedra myth turned out to be very fertile grounds, and we decided to draw from the central characters of Phaedra and Hippolytus. To be clear, our show is not a re-telling of the story. In fact, to say "based loosely on" is even a stretch. In the original Phaedra, the title character falls in love with her step-son, kills herself, and leaves her enraged husband to banish his own son. We were more interested in the simple, human feeling of being uncontrollably in love.

Many of us are now back together, to the chagrin of some.

As we began our exploration, I became more and more fascinated by the idea of examining two characters who are addicted to one another. This past summer many well established couples in my social circle (including myself and my boyfriend) went through breakups. Many of us are now back together, to the chagrin of some. I started thinking: is "getting back together" the taboo of our time? It's no sleeping with your step-son, but something about having to tell your best friends that you are once again seeing the same old person feels shameful. Many young people have experienced the "on again, off again" relationship, myself included. With one particular partner, I remember thinking:  are we the couple that keeps on trying to be together and it just doesn't work, or are we the couple that keeps trying to break up and we just can't be apart? I also remember thinking that I would never know the answer until much later.

This show plays with all the tangled, sticky, pulpy parts of co-dependency; the feelings that make it possible to forgive the person who hurt you most. It unearths the shameful, cyclical nature of relationships, and how impossibly hard it can be to accurately examine your partnership in the throes of emotional wreckage. For me, the show is fuelled by the endless paradox of desire: the less we get, the more we want. Once we get it, do we even want it anymore?

Play it Again Phaedra, November 6th and 7th, 9PM, Mainline Theatre, 10 dollars
www.themap-project.com
Posted by THE CHARLEBOIS POST at 12:03 AM