Review: August, An Afternoon in the Country 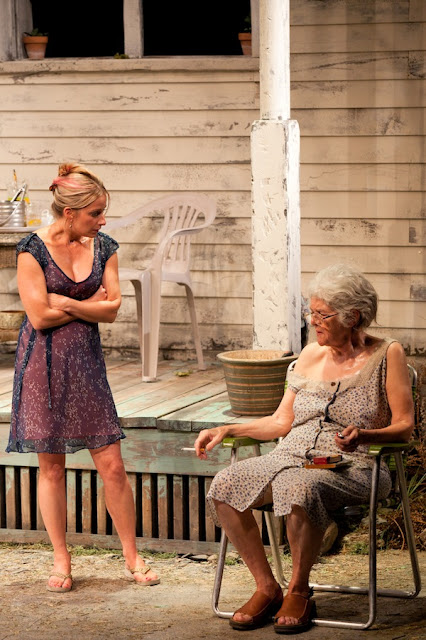 In the oppressive August heat, family tensions come to a boil and secrets and scandals rise to the surface. August: an Afternoon in the Country is an unflinching portrayal of one family’s journey across familiar terrain, the well-worn, cyclical conflicts, celebrations and dramas that make up romantic, platonic, and blood relationships.

Audience members will love August for its true-to-life portrayal of the nature of family conflicts: although it’s natural to hope for a resolution to the tragedies portrayed onstage, like a hot summer’s day that eventually loses steam and fades into a humid, black night, August leaves its broken relationships and hurt feelings hanging in the balance, unresolved, hoping for a better tomorrow, but with only the cold and deadness of Autumn on the horizon.

The tenderness between Chuipka and Little is a delight to watch, and emerges as one of the play’s more believable and heartwarming relationships.

Graham Cuthbertson and Eleanor Noble are captivating and tragic as Gabriel and Louise, a couple whose relationship is dying a slow death of infidelity, secrecy, and conjugal abuse. Chip Chuipka and Pauline Little, as the ailing family patriarch Simon and the overworked Jeanne, are a mirror couple, although their relationship is plagued not by the temptations of the flesh but by the strain of old age and family obligation. The tenderness between Chuipka and Little is a delight to watch, and emerges as one of the play’s more believable and heartwarming relationships.

Danette MacKay and Pier Kohl provide some comedic relief as Monique and André, the soon-to-be newlyweds in whose honour the family has assembled, although their light-heartedness soon turns to concern and outrage when they, too, are swallowed by the impetuousness and anger the hot summer’s night imposes. Of equal note is Arielle Palik, whose performance as the hot-headed and big-dreaming teenage Josée showcases the young actress’s dynamism and comedic talent. Clare Coulter steals the scenes as the self-described ‘ornery’ old woman Paulette, whose take-no-prisoners attitude and wry remarks mark some of the evening’s most delightful moments.

The set and costume design by James Lavoie creates the perfect rural setting for August, one that is simultaneously nostalgic and eerie, homey and foreboding. (And for those audience members watching closely, there is a visual joke in Monique’s wardrobe choice that is a satisfying little clin d’oeil.) As a small criticism, while the country music played intermittently during the play is integral to its content and to the creation of its aura, at times seemed to verge on being too booming to make for pleasurable listening.

August is a fantastic season opener for the Centaur, and a production of pride for its cast and staff. Its refusal to repair the broken relationships and its unflinching attitude to the hard truths acted on-stage mean August isn’t for the faint of heart, but it is for those who want to be challenged and moved by something real and perhaps, if we are honest with ourselves, familiar.

August, an Afternoon in the Country runs to October 28
Posted by THE CHARLEBOIS POST at 4:03 PM

Email ThisBlogThis!Share to TwitterShare to FacebookShare to Pinterest
Labels: august an afternoon in the country, centaur, Rebecca Ugolini