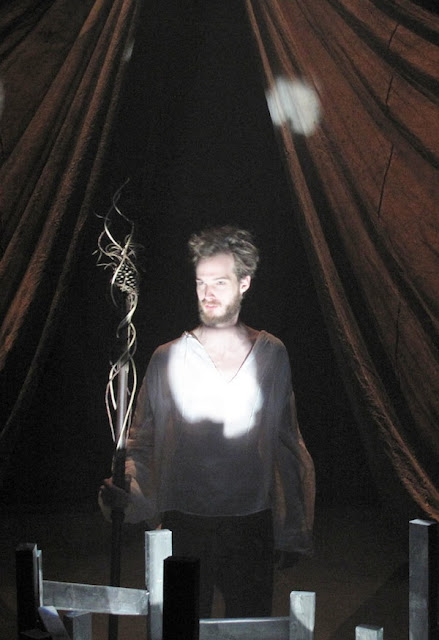 Sons and Songs of God
by Nanette Soucy

There is no better known tale in the Western world. A man is born, supposedly the son of a God. His arrival flanked with revellers and worshippers brings forth a wave of religious fervor, song, and adulation to the city that threatens its ruler and to spread chaos, blood, and barbarism throughout the land. The God-Man is persecuted, his following ruthlessly suppressed. The story ends with the sacrifice of a son and the ultimate suffering of his mother.

Taking a page from the Coen brothers playbook, Scapegoat Carnivale’s presentation of Euripides’s final work, The Bacchae, is set in a nostalgic era of the deep south of the United States remembered most fondly for its music. Venturing a few decades past O Brother Where Art Thou’s Blues roots, we find ourselves in the early 19th century in the decades preceding the American Civil War, when expansion into the promised land of the American West unleashed a wave of missionaries and their choruses of call-and-answer gospel choirs in a religious revival that could be thought of as the seeds of the Evangelical America we know today. The similarities between the figure of Dionysus and that of Christ, the former myth, according to scholars, and likely a source of the latter, makes the setting all the more appropriate.


the production is nothing short of operatic

Those gospel choirs are where director Andreas Apergis and musical director and composer David Oppenheim and Brian Lipson draw their inspiration for The Bacchae’s substantial chorus, which plays such a major role in this iteration of the ancient text, that the production is nothing short of operatic. It is easy to understand, in this repository of revivalism, how opera itself was intended as a revival of Greek drama.

Although ambitious in its approach to translation, directly from the ancient Greek, and not a modern adaptation nor a clever re-telling, the script falls a bit flat in its more Homeric moments, while managing to reel us back in as the more human moments of interaction between the God-Man Dionysus, played with a goatish and relatable subtlety by Alex McCooey, and his antagonist Pantheus (Brett Watson) are perversely hilarious.

The 10-voice strong 5-part choir composed of priestesses to one side of the room, and Maenads to the other, weave a siren song with the warble and weather of the South that nearly lulls one to sleep. The beauty of the intertwining twangs and melodies of the arrangement, stirs and soothes, and much like the voices of the Sirens, is at risk of distracting us from our important mission: hearing the story, as it is carried in the words of their songs. Therein lies the rub: the music is so dangerously beautiful, we could get lost in it and miss the legend and its lessons.

The Bacchae continues to October 20
Posted by THE CHARLEBOIS POST at 10:21 PM