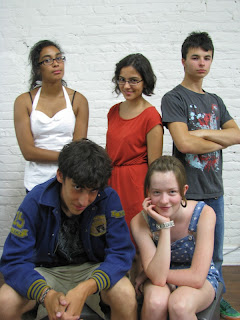 Stories from the detention hall...

In June of 2011 I discovered that I had the chance to put up my own production. This incredible opportunity was given to me by the amazing Shift Space Inc. When I had decided to do a show the first question was which show to do. I wanted to choose something that I felt resonated strongly with me personally. The idea of The Breakfast Club came to me quickly; it had been a favourite of mine ever since I had first seen it and I knew that it was a story that everyone could relate to. I grew up in a world full of theatre, having two parents rooted so deeply in the theatre world, I feel that it has been a very large part of my upbringing. Even with a life surrounded by theatre, the idea of creating a show from scratch seemed like an almost impossible task. I decided to call upon the first two people I knew I would be able to depend on for a job this big: my long time friend Charley Hausknost who had also been brought up in the theatre world and had experience doing theatre, and my best friend Sam Cohen. I got two more actors to join the cast and with that we became the rough draft of what would be The Breakfast Club cast. Being the ones with theatre experience, Charley and I took charge of the project as co-producers. Even with all the hard work we put in, it was becoming clearer to both Charley and I that we needed to get a Director as soon as possible. In November we had two of our actors drop out of the show, saying that the project was too much to take on. So with our cast of three, Charley and I contacted Mike Payette, an incredible director and actor that we had known for years. Mike agreed to direct the show for us and I couldn’t have been happier. After we lost two actors, the show seemed like an impossibility but with Mike on board, it finally seemed like we could actually do this show and make it amazing. Shortly after Mike joined the production we started solving the problems that were stopping us from putting this show on. Thanks to Charley we managed to get two amazing actors to fill the roles of the two that we had lost. We got Sarah Krnjevic as Claire and Tiernan Cornford as Brianne. The wonderful Jo Joffre also joined us in the role of Ms. Vernon. We were a complete cast now and ready to make this show all that it could be. From that point on we started really making the show our own and crafting it into something none of us expected it to be. We were working extremely hard at every rehearsal and Charley and I were working on organizing the show itself. We grew together as a cast and as friends; each rehearsal we would find something new and exciting, making it an amazing time in my life.


We had decided on the dates of August 18th and 19th for the show with three performances total. A few days before the show, after our rehearsal, I looked at the cast after our run, thought about the show we would be putting on in a few days and was suddenly filled with pride. After 15 months of hard work this show was coming together beautifully and had become so much more than I had envisioned last year when I was calling Charley and Sam to get them on board. I also felt so thankful to so many people, Mike and Jo for example who came on board and really escalated the show so that it could become something truly incredible. I was also very thankful to my Mother and Charley’s fantastic Mother who run Shift Space; without them we would never have even done this show. Of course thanks to my amazing cast mates who brought this great story to the stage in the most amazing way possible. Show time arrived quickly and unexpectedly for me, it seemed as though we still had ages before the show, but there we were getting into costume and preparing for our first show. We had no idea what to expect in terms of an audience but we were pleasantly surprised to fill just about every seat we set every show. Each show was nerve wracking and felt like it went by in a blur. After our first show finished I felt incredible. I have always loved the feeling of finishing a show but this time I got to see it from a different set of eyes than just the eyes of the actor. I got to see the show as one of the producers who organized the whole project and felt doubly proud of a show that was so amazing. This show surpassed my expectations in every way possible and it is one of my proudest achievements.

I had no idea what I was signing up for when I agreed to co-produce a stage adaptation of The Breakfast Club. I did not expect it to be so hard, in the organizational sense. I did not expect to have to replace 40% of the cast after getting started. I did not expect to argue with my Co-Producer as much as I did, although I think that is just what we do best. But most of all, I did not expect to love every moment of it – and I did. From the time I was six weeks old I have watched my parents in rehearsal, in show, in classes, and I could not see myself doing any of that...ever. I thought actors were crazy –and to be fair, they are! –but they are just the kind of crazy, that by the time I was 10, I saw an echo of myself in, and realized that I could never be without it. Acting became a passion. To be able to act is to have the ability to share something with people in a way that is so raw and unique. It is a way to see things in a perspective that is different from your own. To live other lives, to have ALL THE JOBS… Acting is storytelling. But what makes a story on stage different from one on a page is that every character plays a part in telling it. Every character’s thoughts are equally present through their actions and behaviour. A book is much more biased. You only get the thoughts of the one protagonist. That is what drew me to theatre. This is why I jumped at the chance to accompany Dustin in this endeavour -  the production of The Breakfast Club. We started this just a little over a year ago, the cast was not the same, and we were rehearsing in his basement. We had no director, and no one to play Vernon. When two of our cast members quit, we were back at square one, with nothing but the idea of wanting to make this show possible. I came close to giving up, and that wasn’t the only time the thought crossed my mind. This is a crazy business and it takes a lot of commitment and drive.

There were so many reasons to abandon the project, but we kept at it. No matter how difficult it may be, I would not pass up the chance to tell this story. After a few months of searching, we finally found our new cast members who were a thousand times more amazing than we could have ever imagined. We also gained the assistance of the brilliant and beautiful Mike Payette and Jo Joffre. It is impossible to express how much all their support and dedication really helped us and how grateful we were to have them.  From then on, it was business as usual. Rehearsals were hard to coordinate, with school, exams and other things to take into consideration. Putting on this show was some of the hardest work any of us had ever done. I found myself denying the fact that I was a Producer more than once… especially since Dustin wouldn’t let me purchase a clipboard. Show time seemed to come out of nowhere and I felt completely unprepared. This project had been a part of me for so long. I didn’t feel like we would ever get it to a point where we would be able to share it with anyone else, but Dustin’s positive attitude and wonderful attempts at encouraging speeches helped me feel ready for the performance that obviously had to come at one point or another, though I have never admitted this to him. If there is one thing he has taught me, it is how to persevere, and for that I thank him. The actual performances were better than I had ever imagined they would be and I was so proud of the work we did. I was overwhelmed with love and support from friends and family, especially, the lovely women at Shift Space who put their faith in us and let us use their beautiful space. The whole experience was nothing like I expected. The five of us grew and learned together in ways we could never have imagined. I know I sound like a cliché, but I’m going to miss the heck out of each of them now that it is all over. I grew up in the theatre community, and at first, wanted absolutely no part in it. But I know how privileged I am to have grown up around such a creative and generous group of people, a community that helped my family through a particularly difficult time this summer. They have taught me so much about life and the kind of person I want to become. It is because of them that I continue to pursue my dreams.

The Breakfast Club was performed Saturday August and Sunday August 19th. At 1190 St Antoine ouest.
Posted by THE CHARLEBOIS POST at 12:01 AM