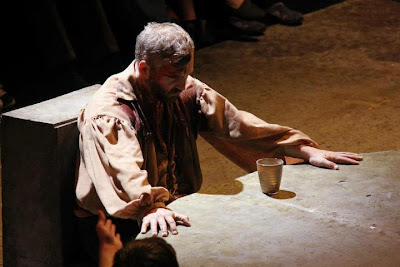 Macbeth satisfies and stuns at Monument National
It IS a dagger...
by Rebecca Ugolini
Superstition holds that it’s the play whose name dare not be spoken, but the Montreal Shakespeare Theatre Company isn’t afraid to tempt fate. Their production of The Scottish Play is graphic, visually-arresting, and haunting, imbuing the famous play with new energy all the while screaming “Macbeth!”
Audience members sit on the periphery of all four sides of the square stage, either level to the action or watching over the railings of the balcony seating above, like spectators crowding a boxing ring from every angle. Thanks to directing by Aaron George, dynamic fight choreography by Paul DeTourreil, invigorating, dramatic, and almost tribal drumming by producer, percussionist, and set-builder Ace Lopes, and the eerie, cult-like movements of the production’s 12 Weird Sisters choreographed by Amy Blackmore, Montreal Shakespeare Theatre Company’s production of Macbeth feels appropriately frightening, claustrophobic, and mad.
Alex Goldrich plays a Macbeth whom the audience can both detest and pity


The play’s fine cast is as well-curated as its production talent, delivering Macbeth’s famous lines and scenes and imbuing its characters with both familiarity and freshness. Alex Goldrich plays a Macbeth whom the audience can both detest and pity, and the transformation of his character from a pure-hearted battle champion to an ambition-blinded madman is spellbinding. Stephanie von Roretz is a delight to watch as the scheming Lady Macbeth, and she plays the role with all the fire and fragility which it requires as the Lady sinks further into insanity. Audience members will be disappointed that the vibrant Mireck Metelski disappears from the action so early on as Banquo falls victim to the play’s violent course of action, but he returns to steal the scene once again as a blood-soaked spectre which haunts Macbeth. The youthful Aris Tyros is a perfectly-cast Malcolm whose sense of purity and innocence meshes perfectly with the idea of the righteous, returning future king. Pippa Leslie excels at conveying Lady Ross’ stoic yet empathic character, and Ian Geldart is brilliant as a Macduff who sustains the action throughout with his solid and versatile acting, truly shining in the play’s final battle sequence.
Macbeth’s large cast is almost uniformly excellent and well-cast, and the play does hold a few surprises. The Weird Sisters, with their hive-mind choreography, are a brilliant touch, and their singing, hissing, and chanting creates a terrifying atmosphere. Jeremy Hechtman’s ‘special guest appearance’ as the Porter had the audience in stitches as he stumbles, burps and jokes about the stage. Joe Stones’ role as Fleance, Banquo’s son, affords him few lines, but something about his calm and refined stage presence, especially at such a young age, makes viewers want more.
The Montreal Shakespeare Theatre Company combines actors from all ages and backgrounds to produce a play which is visceral and absolutely memorable. There are only a few show dates left, and Macbeth at the Monument National is not to be missed.
Macbeth continues at the Monument National to August 25
Posted by THE CHARLEBOIS POST at 7:31 PM