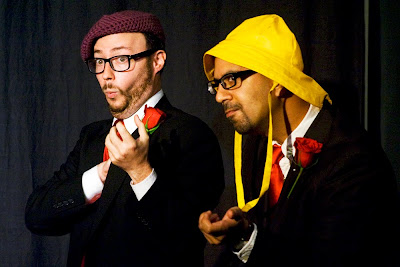 
[CharPo-Montreal is very happy to introduce an occasional column by Kyle Allatt. Kyle will be covering the improv scene in Montreal.]


The place is dingy, poorly-lit.  A fake brick wall stands against the back of a much too small stage.  Even though you’ve already paid cover to get in, you’re still harassed by overworked and underpaid staff to fulfill the two drink minimum, and they’re damn sure in a foul mood because of the crappy tips they get on the 7 dollar martinis.

This is NOT what you get going to Montreal Improv.

Instead, for some crazy reason Marc Rowland, Kirsten Rasmussen, Bryan Walsh and Francois Vincent, founders of Montreal Improv, have decided to create a warm, appealing and friendly atmosphere for their establishment, eschewing traditional comedy club conventions.

Ridiculous, to be sure.  But I’m on to their game.

First they lure us in with their wide diversity of improvised comedy, including Easy Action, a 60 minute 80s action movie, Way The Hell Off Broadway, an improvised musical, and Uncalled For, perhaps Montreal’s most famous and talented group of improv performers, all playing as part of Montreal Improv’s Anniversary Weekend this August 2nd-6th.  If this all weren’t nefarious enough, Montreal Improv also offers classes on Improvisational Theatre, from beginner to expert in both  English and French, obviously trying to cultivate an atmosphere that tricks us into believing that they want to educate as well as entertain.

So what’s the endgame in all this?  Okay, well... admittedly that’s where I find myself somewhat at a loss, but I assure you it’s evil.  I mean, it has to be.  Otherwise why would the place be run by such nice people?  Why would the performers be so talented?  No, it’s all too easy, all too calculated.  The only way to get to the bottom of this?  Go see more shows, take their classes, lull them into a sense of false security and get ready for the right moment to strike.