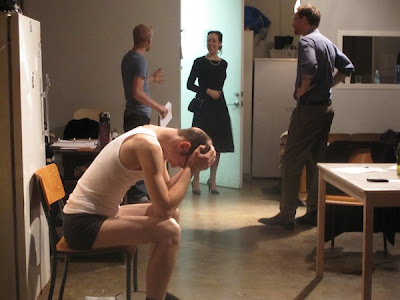 From the original production of Big Plans

TAYLOR TAKES TORONTO
by joel fishbane
It’s a Sunday morning and both Jeremy Taylor and I are going on very little sleep, although in his case it isn’t because he spent the night before in a bar. Taylor’s the proud father of a new baby girl and of all his latest creations, she’s the only one not making an appearance at SummerWorks 2012. Toronto’s annual festival of new and innovative work will feature two works that have Taylor’s fingerprints – one which he wrote, the other which he directed. Although his shows have been produced in Montreal and abroad, until now Toronto has been “the mythical beast we haven’t been able to hunt down.”

Taylor’s in similar water this time around, although the story he’s working with is far more grotesque


A graduate of the National Theatre School’s playwriting program, Taylor is known for writing plays that borrow from history. One of his first plays, The King of Fifteen Island, was loosely based on the story of Paddy Roy Bates, who seized control of a naval base off the coast of England and declared it an independent country. Taylor’s in similar water this time around, although the story he’s working with is far more grotesque: his play Big Plans is inspired by the story of the Rottenburg Cannibal.
“We all remember that story when it happened and how upsetting it was,” said Taylor. That story, of course, is the infamous tale of the Cannibal who found a willing victim online. Big Plans follows the same plot but is in no way a dramatization of what actually occurred. Taylor wasn’t interested in docudrama; his focus was the human story of what it takes for two men to reach the point where one wants to eat and the other to be eaten. “Part of what makes the story interesting is that there was this complicity,” Taylor says. “The victim had signed documentation….what does it take to get to this point?”
A brief workshop production of Big Plans appeared in Montreal last Fall and the same cast and crew, headed by Tanner Harvey, have reunited to bring the piece to SummerWorks. It’s not a play for the squeamish: although Taylor initially shied away from the grotesque, he soon saw there was no way to avoid the more macabre parts of the story. He’s aware that this Summer, these parts of the play may have a deeper resonance than originally intended: we are, after all, still in the shadow of the Luka Magnotta case. Taylor admits to being concerned as to how the Magnotta case will affect the reception of Big Plans, but he’s hoping that the immediacy may help underscore the show’s central themes. “The show stays in the realm of human experience,” Taylor said. “Ultimately, I’m more concerned with what events like these say about all of us.”
Equally timely but slightly-less controversial is My Pregnant Brother, Johanna Nutter’s one woman show which Taylor directed. Based on her experience as the sibling of a trans-gendered expectant mother, Taylor helped Nutter develop the show before the 2010 Montreal Fringe Festival. “[Johanna] knew the story she wanted to tell and my role was to help her structure the show in order to tell it,” Taylor explained.
The show has already been a wild success with productions in both French and English appearing in Montreal, Vancouver, Brussels, Rimouski and “on a moving train, somewhere in Northern Ontario.” With little more then a piece of chalk and her own voice, Nutter relates the story of family, gender identity and the evolving definition of motherhood. With the show scheduled for publication (in French), Toronto will more or less see the definitive version of the text.
As for Taylor, he’s already hard at work on his next play for Scapegoat Carnivale, one of Montreal’s best independent theatre troupes. He’s pleased that both Big Plans and My Pregnant Brother have lives of their own, but even if they never evolve past Toronto, Taylor would still be satisfied. “There’s a wonderful liberty in being happy with a small little run,” he said. “I really like the feeling of being finished.”
I asked him if his other recent creation had anything to do with this view. Taylor laughed and nodded. “The birth of your child definitely changes your priorities,” he agreed. “The truth is that these days, I’d rather be at home.”
Big Plans and My Pregnant Brother run at Toronto’s Summerworks Festival from August 9 – 19. For tickets and info visit www.summerworks.ca
Posted by THE CHARLEBOIS POST at 12:01 AM