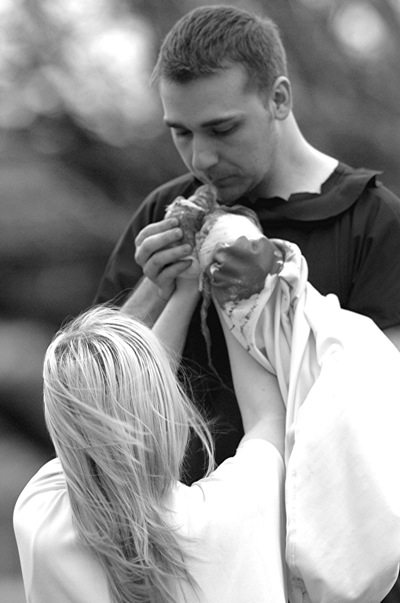 Too Much Talk, Not enough theatre - but Cat Lemieux keeps it fun

by Valerie Cardinal
The QDF’s Summer Calendar launch reminded audiences that although we’ve all got Fringe on the brain, there’s more to summer theatre than that. A record 320 people showed up for a warm evening on the terrace of the McAuslan Brewery to see a preview of some of the events of the summer. However, many appeared to show up only for the free beer; host Cat Lemieux had to threaten the back of the terrace at least three times during the show for making too much noise.
Some acts featured scenes or songs from the upcoming production, while others were just talking. Performers from downtown to Hudson to the West Island showed up to invite audiences to their productions. There were also some impressively large casts crammed on the stage. As soon as I walked onto the terrace, I was swarmed by Roman citizens from The Montreal Shakespeare Theatre Company’s production of Titus Andronicus. As for WISTA’s Hairspray, 14 out of the 33 cast members showed up to serenade the audience with “Without Love.”
The most charming performance (non-Fringe division) was Susanna Jones for the Blacklist Committee for Unsafe Theatre...
A few Fringe shows also got an extra preview, including The Birth of Weza or Go F@#k Your Mother, Between Gossip and Dreams and the ArtCamp! Event. Buddha and the Rock Star performed something they had apparently just made up, which was short, sweet, sexy and well below the five-minute time limit.
The most charming performance (non-Fringe division) was Susanna Jones for the Blacklist Committee for Unsafe Theatre’s The Accidental Death of an Anarchist by the Coward Robert Ford, as she talked about an anarchist dying in police custody during the G20 and led the audience in a chant of “Get Rob Ford!”
My favourite Fringe-related preview was the equally charming performance of “In Short” by Processed Theatre’s EDGES: A Song Cycle’s Shannon Tosic-McNally and Shayne Gryn - all about the different ways one wants someone to die after the end of a relationship. In my opinion, there was too much talk and not enough theatre, but it was a fun evening followed by a dance party with a playlist specially put together by host Cat Lemieux.
For more info, go to the QDF web site.
Posted by THE CHARLEBOIS POST at 1:26 PM