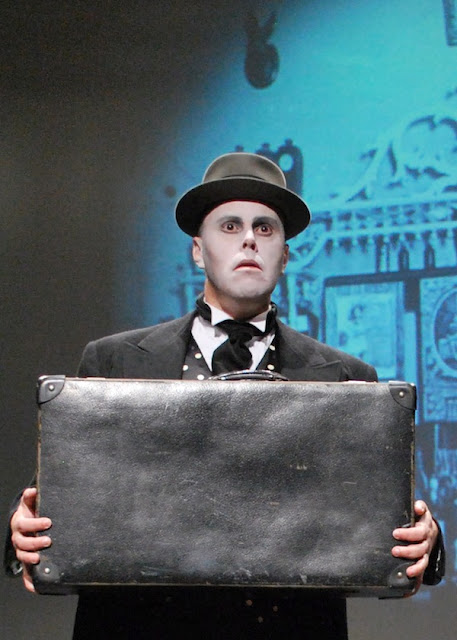 THE DEVIL COMES TO THE MAI (Montréal, arts interculturels) ON JUNE 16th
Award-Winning Keystone Theatre brings their brilliant new SILENT FILM INSPIRED PLAY   “The Last Man on Earth” to the 2012 St-Ambroise Montreal FRINGE Festival, beginning June 16th.
THE PLOT: The Devil and his minion plot to corrupt the last vestige of innocence on earth. Underdog Gormless Joe must play the hero or lose everything, including his one chance at love.
Long before “The Artist”, Keystone Theatre was bringing silent film back to life on stage.  Their first play “The Belle of Winnipeg” garnered critical acclaim and was nominated for three Dora Mavor Moore Awards, winning for Outstanding Original Sound Design/Composition.  Their new play “The Last Man on Earth” broke attendance records at the Toronto Festival of Clowns and headlined the Pearl Company Canadian Theatre Festival in Hamilton.
“This is comedy without words. Think silent screen pleasure… The Last Man on Earth is art, pure and simple.” - Gary Smith, The Hamilton Spectator
“I had no idea how thoroughly delighted and enveloped in whimsy I was about to become….adorable. There really is no better word to describe it.” - Jesse Davis, Mondo Magazine
Keystone Theatre is excited to bring this completely bilingual production to Montreal.  With no spoken word, the voice of the play is the live score played by Music Director, David Atkinson.  The few well-placed title cards will be presented in both French and English.
“The Last Man on Earth” plays at Fringe Venue #09 MAI (Montreal, arts interculturels)        3680, rue Jeanne-Mance, Local 103, Montreal:
Saturday, June 16 @ 23:30
Sunday, June 17 @ 22:00
Monday, June 18 @ 20:15
Thursday, June 21 @ 19:45
Saturday, June 23 @ 15:15
Sunday, June 24 @ 19:15
Tickets are $10 + $2 (service charge) at www.montrealfringe.ca or 514.849.FEST
“The Last Man on Earth” was created by Phil Rickaby, Dana Fradkin, Stephen LaFrenie, Janick Hebert, David Atkinson, Ginette Mohr, Richard Beaune and Kimberly Beaune. It is performed by Phil Rickaby, Stephen LaFrenie, Sarah Joy Bennett, Miranda Calderon and David Atkinson
Contact: Richard Beaune, 416-805-2044
artisticdirector@keystonetheatre.net
www.keystonetheatre.net
Posted by THE CHARLEBOIS POST at 2:04 PM