Review: The Heretics of Bohemia 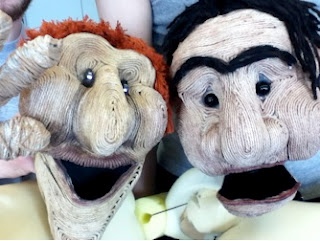 While at opening night, I found myself drawn to the faces of the actors manipulating the puppets in their possession. They were so fully immersed in their performance, it was like getting a double show: the actor's faces contorted in reaction to the action, while their puppets performed. I found that a sight to behold.

Director Allison Darcy said after the show that most of the performers had minimal prior experience handling puppets. But, she added, they all caught up beautifully with the help of the show’s puppet designer, Zach Fraser, who doubled as coach.

puppets gets exploded and fall out of trees, and there is puppet nudity

The audience let slip child-like chirrups of laughter and giggles at the sight of the puppets - but don't drag your underage progeny to the show, if you've got 'em. Heretics comes with a 12 and up advisory: puppets gets exploded and fall out of trees, and there is puppet nudity. (I haven’t seen that many balls since The Leisure Society.)

Scapegoat Carnivale's latest offering is a fable of Shakespearean-like proportions: a faraway land in disarray, hooking up in the woods, and a portly, partying king-turned-despot (who, in real life, would probably subscribe to the YOLO mantra of life. (Look it up.).  Puppets, both shadow and flesh, interact with human actors against a fantasy background that is well-designed and captivating. Live musicians play tunes between scenes.

The story springs from the imagination of the company's co-artistic director, Joseph Shragge. The Queen Mother (regal Leni Parker) is of a “lofty title and little influence.” She watches, exasperated, as her son, the King of Bohemia (hilarious Michel Perron) slides into bumbling paranoia. He believes his land is threatened by heretics hiding out in woods, and desperately seeks “symbols” that are a sign of the rebels’ plans. Tradesmen line up with cooked-up objects of interest, seeking some monetary payment.

Meanwhile, the exiled Equine (Andreas Apergis) and the King’s spy (Felicia Shulman) attempt to locate the heretics in the woods, while buddies Arlo (Dan Jeannotte) and Pierrick (relative newcomer Morgan Nerenberg) eagerly hunt them, too. Enter a strange sidestory about a bird kingdom, the appearance of the actual heretics more than halfway through the show and droll Moravian rivals, and you’ve got a winding tale of medieval-proportions.

Against the backdrop of the ongoing unrest vis-à-vis tuition increases, the concept of keeping and managing power is an interesting item to dissect, but we don’t delve too deep into that topic.
Heretics is entertaining and beautiful, there's no doubt. But the story collapses into a bit of the muddle as we sprint to the finish line.

Will this show clinch another couple of awards for the Scapegoat Carnivale Theatre? Probably, for inventiveness, set design and execution - but no overall blue ribbon. Still, go see it.
The Heretics of Bohemia runs until May 19 at the Segal Centre.
The show is billed as 1hr15, but is closer to 1hr30. No intermission. Ages recommended: 12 and up.