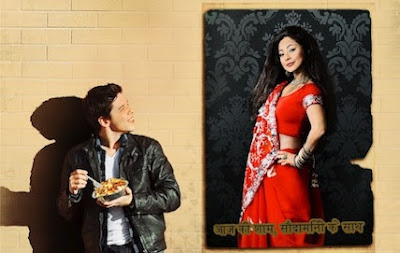 Poutine Masala, which entangles a runaway Indian dancer with a kind of nondescript Québécois bloke, bills itself as an intercultural love story, unique to Montreal.  In fact, with the lovers, Mini and Gabe, cautiously stalking each other in both English and French, the running gag of poutine as kind of an emblem of Quebec culture falls a little flat.  Poutine can’t cut it!  Poutine needs spicing up!  Aimless love affairs are demeaning!  Independence in love, as in so many other things, is overrated.   But never mind.  As the lovers trip over the numerous ceremonies and clichés of each other’s culture, it is Bollywood to the rescue.

The angles are such that where I was sitting I saw the back of Mini’s head and not much else for nearly ten minutes.

Indeed, to the audience’s evident delight, the music and dancing hardly let up.  Conceived of and choreographed by Deepali Lindblom, who also stars as the girlfriend, Mini, this show’s easy transitions from dialogue to dance make for a scintillating production. Lindblom and Julian Péres, who plays Gabe’s buddy, Pierre, are clearly the most accomplished dancers, exuding a kind of energy and fluidity. Some others in the eight-person chorus simply don’t keep pace. Nevertheless, Jose Dufour, playing a smitten but defiant Gabe, holds his own and seems to infuse a certain Western, disco-like-quality into his Bollywood turns.  (It is as Mimi’s dance partner that he plausibly evolves from a reluctant neophyte into an implacable lover.)

The sparse use of set pieces allows the dancers to take over the stage at will.  Foregoing furniture allows the dancers' bodies to be used in innovative ways.  Bars, apartments and hotel rooms are evoked along the way. The effectiveness of this is circumscribed by a blatant disregard of sightlines.  Much of the story is told in split stage, Gabe recounting their date in French on stage left, Mini spinning her version in English on stage right.  The angles are such that where I was sitting I saw the back of Mini’s head and not much else for nearly ten minutes.  And, indeed, within the dance sequences the couple spends almost all their time dancing front centre, out of view from over two-thirds of the audience. Since the dancing talent is so uneven, this is especially detrimental to the production.

In the second act, Mimi’s obscenely rich parents suddenly materialize, with Pradeep, her erstwhile fiancé from India in tow.  Suffice it to say, the production’s rollicking, farcical tendencies are unleashed and hilarity ensues.   Gabe may be a ‘foreigner’, mais Colisse, Tabernac he’s a Quebecois ‘foreigner’!  Mini, for her part, has some stern truths about love to impart to her “enslaved,” mother.   Under the direction of Olivier Berthiaume, all this is wrapped up in a joyful conclusion, featuring a show stopping dance routine to a Bollywood club mix, energized by music written specifically for the production by Mathieu Beaudet.  Clunky and clichéd at times, Poutine Masala nevertheless delivers high-octane bicultural entertainment!