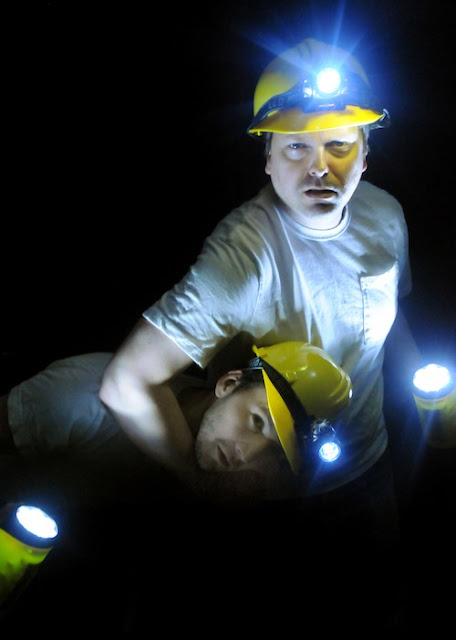 they were on the edge; they have no safe place to go to; and were forced to put up with each other

Upstage and CharPo contributor Sarah Deshaies  spoke with writer/director Jonathan Fournier and actor Santiago Espinosa about Miner Inconvenience. Below is an abridged version edited by Estelle Rosen, CharPo Editor-in-Chief.
UPSTAGE: We were talking about the Chilean miners; was that the inspiration for you to write this story?
FOURNIER:  Yes it was. We were given an assignment in an English class in 2010 to write about the Chilean miners. I wrote about two pages but I wanted to see if I could make it into a play.
UPSTAGE: What was it that made you want to continue to make it into a full length play?
FOURNIER: Well I guess because they were on the edge; they have no safe place to go to; and were forced to put up with each other. Not always a fun situation.
The audience is going to sweat for sure.

UPSTAGE:  We see a lot of plays and movies where characters are trapped in an elevator or a cabin for example.  In this case, you’ve set it in a cave. You’ve also set the stage to give people the feel of being trapped underground. Could you tell us a little bit about the set.
FOURNIER: It’s going to be presented at Freestanding Room. A very hot small space, with no separation between actors and audience. They'll feel like they're trapped in the dark cave with the miners. The only lighting for most of the show will be by flashlight. We’re aiming for a unique visual experience
UPSTAGE:  So many Fringe venues are notorious for being cramped and hot. It’s nice you’re able to use that feature to fit with the story. If you were to put it in a larger space with air conditioning, it wouldn’t be the same.
FOURNIER: I’m not sure it would be successful in a large space.
it’s a weird situation, trapped with this older man who I have nothing in common with and have to deal with him, live with him

UPSTAGE: The story is about two miners; Mario, an older more experienced worker, and Santos, a younger more rebellious worker. Santiago, you’re playing Santos, the younger one. Tell us a bit about the background..
ESPINOSA:  I’m trying to get out of there because my plan is to do something that’s not mining. Mario keeps talking to me about work. We get trapped and I have to deal with this old man who’s on my case. I’m a funny guy in the play, (and in real life), so it’s a weird situation, trapped with this older man who I have nothing in common with and have to deal with him, live with him.
FOURNIER: Just to expand on the comedy aspect, Santiago actually is a stand-up comedian and he uses his comedic side in the show.
UPSTAGE: Is this the first Fringe outing for both of you?
FOURNIER:  I’ve been in the Fringe as an actor in 2009 and in 2010 I wrote and directed The Boy and the Wrapper which people might remember as that Christmas show in June.
UPSTAGE:  Santiago, I’m curious whether claustrophobia is something you’ve ever feared or experienced?
ESPINOSA:  It’s definitely something I don’t like. Even to think about it drives me nuts. I’m very afraid of it. Yet acting it was fun.
I’m saying that it’s funny and fun but it’s really a very profound and meaningful play.

UPSTAGE: Is it more like a buddy story or is it more like No Exit where it’s dark and the characters can’t leave each other?
ESPINOSA:  I would say it’s more like No Exit. I’m saying that it’s funny and fun but it’s really a very profound and meaningful play. When two people are trapped  together in a place, they have to express themselves, say things on a daily basis they might not otherwise. When I read the script that’s what was meaningful to me.
UPSTAGE: The Chilean Miners story was so exceptional; people were following it closely. Jonathan we’ve had a lot of infamous mining accidents in Canadian history as well. I’m curious how much research was involved?
FOURNIER: I did some research on the Chilean miners in particular. I was more interested in telling a good story. It shouldn’t be taken as a factual story.
Website for tickets
Read also Jonathan Fournier's article on self-publishing.
Posted by THE CHARLEBOIS POST at 12:01 AM