First-Person: Ann-Marie Kerr on The Debacle 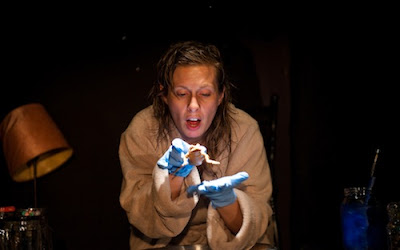 Musical Chairs – moving from director to actor in a solo show
The jarring jars
by Ann-Marie Kerr
Sue Leblanc-Crawford of Zuppa Theatre in Halifax approached me a few years ago to direct her in a solo show. We would co-create it and with any luck it would tour the world.  When we started, we waded into intimate territory immediately. We found that we had 100 things in common including coming from families of 7. We realized a mutual obsession with death and dying, our own and others, how it would happen and when. Like with lots of theatre made from scratch, the process had us soaring and falling daily. We’d try ideas for days and weeks at a time only to cut the heart of them knowing they didn’t work or they weren’t taking us to the centre of the piece. We scraped away at the surface for a long time and then finally began to see what might be the core of the show.  It was our abject terror of being the only one left, being the end of our family line.  The show became about a woman finding the courage to crash through the immobilizing fear of losing everyone but needing to go on.
the character would be completely cut off, literally unable to get down without help

We began gathering jars, hundreds of jars; we put out a call and everyone kept leaving them on our front porches. We put things inside them - objects that represented a memory - either a real one or a nearly real one.  Half-way through the process, Sue discovered a crawl space at the theatre we were working in (the Plutonium Playhouse in Halifax) and our minds blew open with the thought that maybe her character could be perched up there 12 feet in the air- that the crawl space would be our stage. Up there, the character would be completely cut off, literally unable to get down without help, and forced to cope with her deep denial of the death of her last family member.  So, we began to create the show with Sue up there, way above the stage floor with jars crammed into every corner, teetering on the edge of a 12-foot drop. Opening night we had 150 jars on stage, all of them crammed full of some fragment or other of a story we had told each other in the room.
we both came to want children later in our lives and so she needed to get on it if it was going to happen

Throughout it all we talked about babies, and pregnancy. I had been through it a few years before and now have a 5-year daughter, and Sue was just realizing and admitting she wanted a child and wanted to start trying to have one. These conversations were not outside the themes of the play, they brought up questions of personal legacy and a lifetime commitment to someone beyond ourselves. For me, among the feelings was the fact that I’m adopted and have never known anyone who looked like me, and that I am already the end of a line in a way.  For Sue, she couldn’t imagine coming from such a big family and having no children of her own. And frankly, we both came to want children later in our lives and so she needed to get on it if it was going to happen. I encouraged her to go for it, that theatre would always be there, and this was her time to have a baby. We joked about the idea that I’d have to be the understudy for the show - not completely out of left field considering I’ve acted longer than I’ve directed - and so if that came about, maybe we’d …and…lo and behold, a few months later, after we closed the show Sue found out she was pregnant. I hurt my voice screaming with joy for her. She is due at the beginning of June.
Then Festival TransAmériques called and wanted the show for the end of May. She wouldn’t be able to do it, she’d be having her baby. It was a very hard thing to face, the idea that we’d have to turn down the offer considering Sue loved playing the show, was amazing in it, that it had been received so well, and it was her dream to have it tour. Not to mention FTA is one of the most prestigious Festivals in Canada and they wanted it. It occurred to me, although naturally a very delicate subject, that maybe we could actually switch roles for this one. That she would direct and I would play the part.
I now understand viscerally the reasons she was making the choices she was as the actor

We decided to do it.
We are moving the lens around and the major discovery has been how it is deepening our collaboration. The exploration of the text and staging is growing because of our switched perspectives.  I now understand viscerally the reasons she was making the choices she was as the actor and she is seeing why I was asking for the things I was from the outside. It’s a rare and gratifying experience that I didn’t expect to have. Again, it’s very intimate. I know that this isn’t a new idea for many companies who have shows that run in rep for years, but for us this is a new and profound thing we’re sharing. It does feel strange that Sue won’t be there on my opening night in Montreal, handing the bowl of ice and the kettle and soothing words up to me, but she will be home, giving birth - by far the richest possible experience.