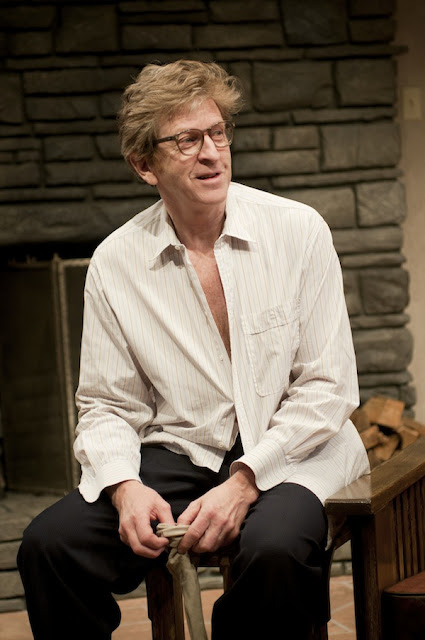 Actors Rule
Slade's married unmarrieds at Segal
by Chris Lane
Bernard Slade’s celebrated play, Same Time, Next Year, is about changes and developments in two people, in their relationship, and in their country. The play is set against the backdrop of the shifting moral and sociopolitical landscape of 20th century America and it is a love story between two people who are married, just not to each other.

In 1951 George and Doris spend one passionate and adulterous night together before realizing that they cannot simply go back to their respective spouses and forget about each other as they have unwittingly fallen in love. Having decided to spend one night together on the same weekend in the same hotel every year, the play follows the development of their secret relationship at roughly five-year intervals. The transitions between the visits are part of the fun of this production, as they set the scene with music and video clips from each time period. Even for one of the few patrons who had not experienced those decades, the montages very effectively got me into the mindset of the year of each scene.
...they never simply let themselves forget that they’re actually married to different people whom they cannot help but love as well...

The historical setting of the play is certainly important, as the audience sees America change through the development of George and Doris. They latch onto changing morals at different paces, and each take their turn to reflect certain aspects of American contemporary culture. Nevertheless, the play is really about the dynamics of a relationship between two people who work so well together, despite all their changes and differences, yet cannot actually be together because of their pre-existing marriages. They also have children, and frequently speak of both their children and of their spouses. They even have a tradition of telling a good story and a bad story about their spouse to each other, so they never simply let themselves forget that they’re actually married to different people whom they cannot help but love as well. As their relationship progresses, the emotional stakes run higher: they have to choose if and how to continue with their arrangement.
Both actors carry the play tremendously, particularly in the way that they show their character development over the years without losing idiosyncrasies. Michelle Giroux is captivating as Doris, and she uses her sultry voice wonderfully, as she subtly changes it throughout the play to show her character’s age. Unfortunately not every aspect of their characters age as consistently as her voice does, as their ages are sometimes difficult to discern, such as at the start of the show where R.H. Thomson is hard to buy as the twenty-something George, and when Giroux comes in seemingly twenty years younger in her character’s hippie phase. Part of the power of George and Doris’ relationship is the way that they help each other discover their own selves, and both actors excellently portray such expressions of self-discovery and mutual understanding.
Same Time Next Year, as directed by Diana Leblanc at the Segal Theatre, is very well-put together, and while it does not take many theatrical risks, it is worth seeing for its two strong performances, and it features a poignant narrative punctuated with some wonderfully comedic moments.
Same Time, Next Year continues to May 20
Posted by THE CHARLEBOIS POST at 3:30 PM