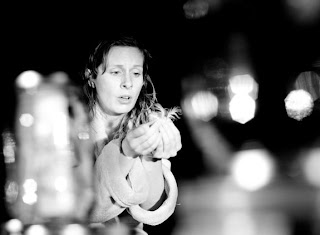 A MOMENT IN TIME
by Joel Fishbane

Enigmatic and challenging, Zuppa Theatre Co’s The Debacle is in many ways the quintessential FTA show.  Now in it’s sixth year, the Festival TransAmérique is an international, multidisciplinary festival renowned for importing the unique and experimental. Most shows at the FTA will defy convention and that’s precisely what The Debacle does, situating its plot-free narrative inside a cramped and cluttered crawlspace that may be real or may be a mere representation of our heroine’s mind.

Our nameless heroine (played admirably by Ann-Marie Kerr) has locked herself away, either metaphorically or for real, in the hopes of avoiding the fact that her sister has had an accident and is dying in a hospital. She spends her time living off of gumballs and storing her memories of her sister inside a glass jar. This allows for a stream-of-consciousness parade of reminiscences, some witty, some far more profound. Eventually we get to the heart of the matter – the reason for the accident – and it naturally involves a hefty dose of guilt and shame.
Actress / director Kerr is one of Canada’s busiest artists, working both across the country and internationally. The show is a co-creation with Susan Leblanc Crawford, an award winning actress who had to sit this particular production out to have a baby. Kerr has stepped in to replace her and she’s more then able – she gives a brave performance that moves from comedy to pathos in the blink of an eye.
The Debacle takes its name from some paintings by Monet, so it’s appropriate that the show comes across as a theatrical representation of what all paintings try to possess: a moment in time. The compressed set helps illustrate this, as does the static nature of the direction (Kerr is so restricted that she’s never able to stand). One could argue the entire play takes place within the a fraction of a moment inside our heroine’s head – that moment when we know our life is about to change forever.
Given this, the show has its own rewards, though they aren’t the usual ones found at a night in the theatre. One is Kerr’s performance, but the writing is equally sharp and for the most part helps us follow the rapid shift from memory to memory. Nor is the text maudlin: any show that features Richard Marx in the pre-show music and Bonnie Tyler’s Total Eclipse of the Heart as a plot point has a sense of whimsy at its core.
Even so, it’s a difficult show to fully comprehend, at least without the program notes. Not everything the creators are going for is entirely clear without doing a little advance reading, something which will probably be addressed as the show continues to develop.
THE DEBACLE runs at the FTA May 29 – 31 at Theatre Prospero. For tickets call 514.844.3822 or visit www.fta.qc.ca

Read Ann-Marie Kerr's first-person piece about The Debacle
Posted by THE CHARLEBOIS POST at 2:09 PM