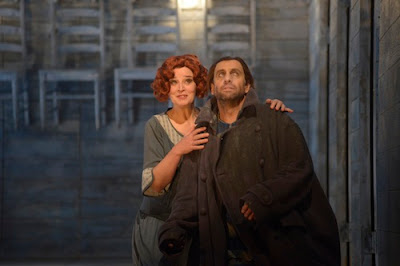 In Dutch
Opéra de Montréal did itself no favours with its new production
by Gaëtan L. Charlebois

You know within the first 20 minutes from the beginning of a performance of Wagner's Der Fliegende Holländer if many of the key elements of a successful production are in place. So, tonight, at Place des Arts, with Opéra de Montréal's import from COC in Toronto...

Overture, robust, clear as a bell, lyrical and lovely...check. Conductor Keri-Lynn Wilson (profiled tomorrow by Richard Burnett at CharPo-Canada), helmed a solid Orchestre Métropolitain through an evening that showed assurance for both a conductor and orchestra whose histories don't suggest huge familiarity with the stubborn German. Wilson, especially, surprised for some of the musical moments later in the evening which were even bold and revelatory.

Next on our list, set and lighting...check. And what a wondrously disturbing set Allen Moyer offered - all skewed lines and closed spaces which, to some extent, allowed the voices to tame the hideous accoustics of the hall.

I could tell you the story of the opera as Wagner wrote it, but that wasn't the opera I saw.

On to the chorus. Check. And how. The company's chorus, led by Claude Webster, felt this music in their bones. The "40 Fat Fräuleins" of the second act offered dynamics which were surprising and right and, in the third act, the dueling men's choruses - for my money one of the greatest moments in any opera - was thrilling.

After those opening 20 minutes of the opening we get into the meat of the opera. And this is where things went to hell. I could tell you the story of the opera as Wagner wrote it, but that wasn't the opera I saw. This was, once again, as many modern productions of Wagner are now directed: layers of imagery and symbolism burying what was and presenting instead something new, bright as a shiny penny and an utter mess. This production actually raised the stakes a little higher and changed the ending. I will not tell you how but suffice it to say that it curled the logic of everything and, in the context of what came before, did not make a lick of sense.

But what would a modern production of Wagner be if one couldn't bitch and moan about a director, in this case Christopher Allen (with Marilyn Gronsdal on this remount), who had lost his mother-fucking mind. The Dutchman wears a big coat and when he removes it he is in a shabby, striped prison outfit. Is this a symbol of his imprisonment to his curse or (God forbid!) an echo of a concentration camp uniform. Why? I couldn't possibly tell you except that Wagner was a notorious anti-Semite (though well before the Nazis). Anne Militello's lighting, so fine at the start, during the party scene in Act III turns into a sound and light show that was OTT.

Then there is Maida Hundeling as Senta. The director was unkind to her.

But how were the principals, Mrs. Lincoln? Thomas Gazheli as the Dutchman let a rich, gorgeous voice ring through the posing he was required to do, and managed to bring some pathos to the aimless wandering everyone did. In comparison, Reinhard Hagen's Daland got lost in the shuffle and during passages with Gazheli often disappeared completely. Endrik Wottrich was almost too large - too Heldentenor for a role that is, basically, romantic lead. As the Steersman who has all the fun tunes, Kurt Lehmann had a terrific mid-range, a good lower register and only got mildly strained in the upper.

Then there is Maida Hundeling as Senta. The director was unkind to her. Senta, with her obsession for a man who may or may not exist, is quite, quite mad - her first haunting solo tells us that. But Alden had her wander about the stage with a picture of the Dutchman like some giddy teenager pining over a teen mag pic of RPatz. It didn't help that Hundeling has a strange way of punctuating her phrases and over-modulating. There were some unpleasant sounds, near the end some very wrong ones, and finally a voice that is described in the program as "metallic" too often sounded tinny - like an early 20th century diva heard through a Victrola.

Montreal does not like Wagner and so he is not done here almost at all (decades since the flop that was Tristan und Isolde). Although Dutchman is one of the most accessible of the German's opus, it is still not all that accessible (particularly not with this whack-job production). Yes, the company did decide to jab in an intermission after act one (when, in more sophisticated opera cities, there is no intermission at all as the music flows through). Simply the comforting musical pablum of Verdi, Puccini and Massenet the operaphiles of this city are used to, has not prepared anyone for the long, still passages (even in this opera) where the singers accompany the orchestra rather than the other way around.

I suppose I should be happy to see a well-conducted production, however weird. It was on my bucket list, after all. But after a Siegfried at English National Opera, a Ring at Royal Opera House, and a Tristan and Isolde also at Covent Garden where directors had their wicked way with staging, it would be nice - just once! - to see a production of a Wagner opera that wasn't mostly fodder for irritation.

Der Fliegende Holländer (The Flying Dutchman) runs to November 17
Posted by THE CHARLEBOIS POST at 11:54 PM