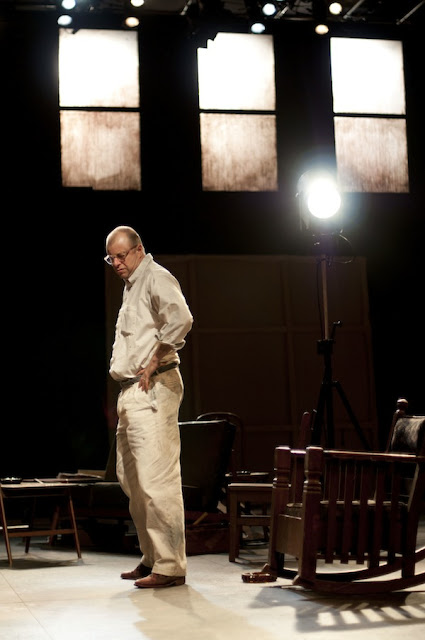 Art about an artist doing art
by Jessica Wei
@autobiographica

The first thought I could successfully pull together after coming out of seeing RED by John Logan at the Segal Centre: I want a fucking cigarette.

To simplify this play would be to say that it's about a more-than-mildly disturbed artist in the '50s who waxes on prosaically, manically, to his young protegé/assistant while smoking furiously and pacing around his New York studio. To add some specific context, it's about Mark Rothko (most famous for his paintings of bright squares) at the height of his fame, knee-deep in red paint, working away at a series of murals for the wildly expensive Four Seasons restaurant.

This play is a piece of art about an artist who is creating art and also coming to terms with what art is.
And it's impeccable. Logan's script succeeds in its two primary functions of helping the audience understand the thought process behind these bright squares on canvas and sending us out those clearly marked exits feeling like philosophers (as Rothko says, “Painting is 10% putting paint on the canvas – the rest is waiting and thinking.”). We walk out murmuring, “Oh that's interesting”, we debate the luxury of art, we realize that money is not the villain and nor is the pursuit of it, and we muse, understanding, at least theoretically, the sacrifice of compromised integrity, feeling as if we could have been on that stage and in that studio pacing around with arms dripping with paint and a red-stained cigarette dangling from our lips, ranting and raving. This reaction, for the playwright and also everyone else backstage, is the endgame.


Randy Hughson, as Rothko, is magnetic.

The stage that feels so homey and inviting, designed by Eo Sharp, is a meticulous recreation of the ideal studio, complete with well-placed mirrors, giant canvases, immersive large-scale reproductions of Rothko's work, and couches that welcome paint splatters. Pair that with Keith Thomas' music and Robert Thomson's lighting design (wheeled studio spotlights in accordance to Rothko's distaste for natural light), and it's so intimate, we forget that we're sitting in the dark in the Segal Centre in a packed theatre. And so, the prosaic, manic ranting of the artist continues.

Randy Hughson, as Rothko, is magnetic. He is an actor people lean in for, hoping to catch every line, every word, every grainy heave of his artist's emphysema (he's so good at coughing; how does anyone get that good at coughing on cue, is that something they teach you in theatre school?). His mixed chemistry with Jesse Aaron Dwyre, the young assistant Ken, adds to the wounded artist appeal. Rothko is overbearing, deeply insecure, and trying to reconcile art and commerce, knowing that while he has never been this successful, he will not be as successful again. Ken, meek, eager, heartbreakingly young, must restrain his ideals and prime the canvases of his hero, that will soon be hung in a dark restaurant full of super-wealthy diners. Dwyre is impressive in his restraint, impressive in his calculated moments of emotional clarity, happy to let the older artist fill the room with ego. Impressive, yes, but forgettable.

It is a cerebral play. It invites the audience to take a voice in the discussion of the meaning of art, to put oneself in the place of the artist, but it does not inspire feeling. For all its philosophical meanderings, RED led me by the hand up to the edge of the cliff, but it didn't push me off. While I stared at the intoxicating backdrops in vibrant reds and browns, I understood what Rothko wanted me to see, but they were simply beautiful squares. This play made me think, but it couldn't quite get me to feel.

So, upon exiting the darkened theatre, squeezing between the well-dressed theatre-goers sharing a glass of wine in the lobby, escaping out the entrance of the glassy Segal Centre and into the chill snowy night, I lit a cigarette, and I did some thinking.

Red continues at the Segal Centre to December 16
Posted by THE CHARLEBOIS POST at 4:11 PM