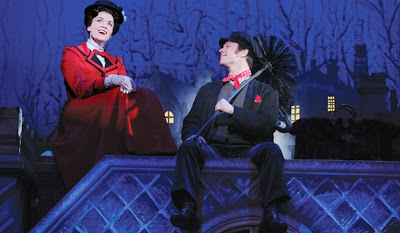 
A Jolly Holiday
by Élaine Charlebois
I will be honest.
While getting ready to go see Mary Poppins at Place des Arts last night, I was mentally preparing myself to ignore the whispering of young children I assumed would comprise the majority of the show’s audience.

As it turns out, most seats were occupied by middle-aged couples and friends who had seemingly come to the show for a nostalgic experience. And they definitely got what they paid for. Not only was the show itself wonderfully performed, but the set design and costumes were exciting and unexpected.


Con O'Shea-Creal, who played Bert the chimney sweep, was particularly charismatic and assumed the narrative part perfectly. Another standout performance came from Karen Murphy who played both the “Bird Woman” and the heinous former nanny of Mr. Banks, Miss Andrews. Her vocal talents and her ability to evoke laughter simply through her facial expressions made for a highly entertaining experience.

While practically all the children in the Salle Wilfrid Pelletier were zonked out by the end of Mary Poppins, the remaining adults giddily exited the theatre singing their favourite songs. Overall, what a show!
Mary Poppins is at Place des Arts to November 25
Read Richard Burnett's preview piece on Mary Poppins at CharPo-Canada
Posted by THE CHARLEBOIS POST at 6:07 PM