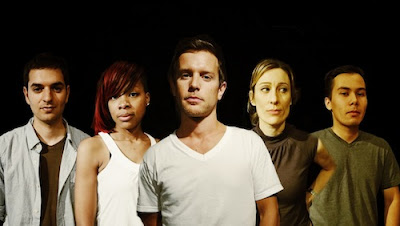 COME SO FAR (GOT SO FAR TO GO)

If you were asking me if I felt discriminated against in my day to day life, I would answer no. The truth (much like recipes in cookbooks) is much more complicated. The truth is I live my life in such a way as to avoid situations that could provoke discrimination. I don't hide who I am, but I don't live my life without being aware of my surroundings and how I should act in them. But really, is that so different from anyone else? And is that fair?

A popular quote says that anti-gay bigotry is the last acceptable form of discrimination. While that's true, I would also argue that racism is also quite common in today's society. Sure, it doesn't take the form it used to - but it's still there, in the language people use and the tendencies many of us share.


But hold on, wait. stop the presses. What am I writing about? My name is Donald Rees, I run a (sometimes) hilarious website and am Artistic Director for a Montreal Theatre company mostly known for its laugh out loud comedies. 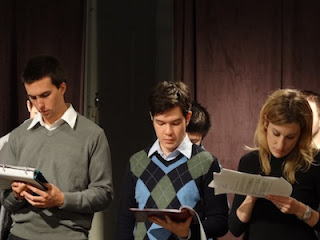 "Why are you talking about discrimination?" you may ask. "Why is your next project a hard-hitting drama with a political edge?" What great questions you ask. You're an excellent question asker. This show is so far from our comfort zone, you wouldn't be the first person to wonder how it fits in the Brave New Productions catalogue.

"The Laramie Project: 10 Years Later" is about change and progress and it tries desperately to figure out some method for measuring the two. It's an impossible challenge, since tales of personal development feel insignificant when laws and human rights are prevented from being adapted to include everyone. It's hard to feel hopeful in light of statistics that tell us hate crime is at an all time high. Some would argue those statistics are false, that the numbers are higher because victims feel more comfortable coming forward but to say that's the end of the story feels short-sighted and convenient.

Matthew Shepard died almost 14 years ago, on October 12th. Our opening night will be the anniversary of his death. Many people don't remember who he was or why his story is important. There have been so many cases of violence and other tales of progress in the gay rights movement, it's easy to overlook and forget the lessons this one story offers us. 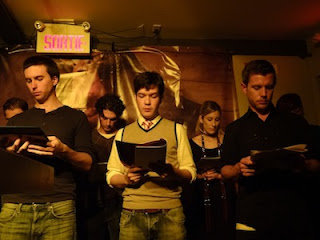 The original play, The Laramie Project, covered the events of his death. Our show is a sequel and examines whether people follow-through with their promises. It's a cautionary tale that warns us all how quickly the spark of hope can be extinguished when doused by the first possible excuse or opportunity. Over the past three months of rehearsals, no one in the cast felt we could judge the people of Laramie, Wyoming (whose real words make up the text for the play). You don't have to look far to see how their stories could be reflections of our own, and how they can apply to aspects of our lives at a much more basic level than the theme of the play conveys.

That still doesn't answer how Brave New Productions came to pick a project so wildly different from anything we've done before. Or does it? Next year will be our own 10 year anniversary, and while many aspects of our company remain the same as they did on day one, a lot has changed. There has been progress. I personally felt like the time had come to check-in with ourselves after so many years of comedy. Along the way, we've learned that without tears you can never appreciate the sweetness of laughter, and there have been plenty of tears along the way. There's a reason why the 20 person cast of our show is comprised of returning cast members ranging all the way back to our first show. Some companies struggle to hold onto their team for one production, we're lucky enough to have built a family of talented eager performers who are eager to embrace each new challenge and project.

Working on this show has been a gift and a learning experience. People try to tell me that comedy is hard, and I shake my head. Maybe that's because we've done comedy and thrived. I feel a huge responsibility to the people whose words will be shared with the audience on opening night, to make it honest and say it right. I feel sorry for people who are only going to get to see the show once, for I've had the privilege of sitting in front of our city's best actors and have them move me to anger, laughter and tears so many times I've lost count. 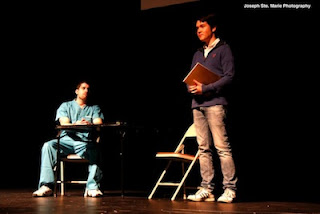 Never content with a singular challenge, we've also just announced that we're taking our show on the road - to Toronto. What's unique is that we're mixing the Montreal cast with new talent based in Toronto to create a show unlike anything we've ever done before. Rehearsals are taking place over Skype, Marc Roth (who is co-directing the Toronto show) and I are running back and forth between both cities to make sure the performances stay in sync. It's a very exciting method of bringing a play to life, and if you live in Toronto you'll definitely want to check it out at Buddies In Bad Times Cabaret November 9-11, 2012.

For more information on "The Laramie Project: 10 Years Later" at Buddies In Bad Times Cabaret in Toronto November 9-11, visit:
http://buddiesinbadtimes.com/event/the-laramie-project-ten-years-later/
Posted by THE CHARLEBOIS POST at 12:01 AM