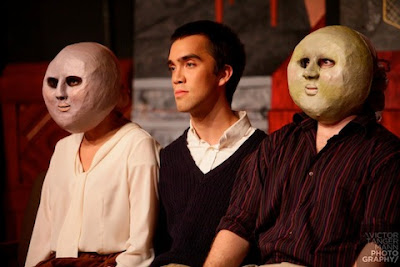 Vaclav Havel died last year.  I don’t remember hearing anything about it.  Not that I would have noticed, as I had no idea who he was until last night.  And I’ve been feeling a little ashamed.  After all, few CVs likely boast the credits of poet, essayist, playwright, AND President of Czechoslovakia. Add to these the fact that his life inspired the creation of an Award for Creative Dissent, and you get something of the man’s eclectic legacy.  It’s a legacy that’s being very well served by Tuesday Night Café Theatre’s production of Havel’s one-act play, Private View.

Set in Czechoslovakia in 1975, Private View features Fred and Vera, a married couple who welcome Michael (whom they repeatedly insist is their best friend) over to admire their newly renovated and garishly outfitted home – choice objects on display include a scimitar, a Madonna and a re-purposed confessional.  We quickly discover that our hosts are fetishists:  they are obsessed with collecting and showing off symbols of the (ill-defined) “good life.”  Beyond this though, they are bent on skewering ‘best friend’ Michael for his wrong-headed choices (working at a brewery, not having a child, or frequent enough sex even!), imploring him to be more like them.  For his own sake, of course.

Admittedly, I’m not well-versed in Czechoslovakian history, so the socio-political dimensions of the piece (despite an overly-earnest opening voice-over) were quite lost on me.  And exposing the desperate insecurities of life’s seemingly self-satisfied is thematically a little old hat, so I wasn’t blown away by Havel’s writing.  That said, I found this 45 minute production engaging, thoughtful and feisty, sure of itself without being heavy-handed; it also boasts a committed and spirited cast, and a new director (Gabriela Petrov) adept at pacing, and with a whole lot of promise.

Although incorporating mask work into the piece (through the eerie moon-faces of Harry Burton and Kimberly Drapack) certainly added texture and intrigue to the production, this choice to darkly echo our misguided hosts perhaps created a redundancy – the disturbing underbelly of the play’s proceedings was already impossible to miss.

The final moments of Private View – a symmetrically staged and utterly unsettling portrait – left an indelible impression on me.  I won’t give it away.  But it hauntingly affirmed Havel’s own assertion that “Lying can never save us from another lie.”

Private View continues to October 13
Posted by THE CHARLEBOIS POST at 4:50 PM