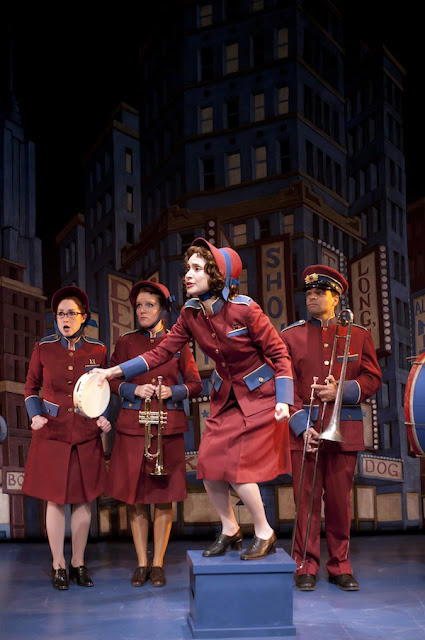 Warm lights, jazzy American pop music, and New York in the 1940s – is there any better setting after walking around in cold Montreal wind and rain?

After having seen the Segal Centre's production of “Guys and Dolls”, I'm convinced there isn't. Marking Diana Leblanc's directorial return to the Segal Centre and starring seasoned CanCon musical theatre vets Scott Wentworth, Frank Moore, Susan Henley and others, this musical tells the tale of star-crossed lovers in the Broadway everyone dreams about (underground gambling, sassy showgirls, snappy rhetoric and even a few zoot suits). Nathan Detroit (Moore) mans a news stand by day, runs a floating craps game at night, and when he's not doing either, he's trying to keep his showgirl fiancée Adelaide (Henley) happy with evasive promises of marriage. Having encountered some financial problems – enough to threaten his circuit – he makes a bet with fellow gambler Sky Masterson (reprised by the dashing Wentworth) a bet that seems almost fully guaranteed in his favour. A thousand buckaroos says Masterson can't convince a beautiful Christian missionary to go to Havana for a date. But as any man with a pair of dice in his pocket knows, life is a gamble.


You know when you turn around halfway through the production to find the entire audience smiling to themselves, there's charisma in the air.

I can only imagine the hours put into staging this production. The set is perfection – three sheer curtain backgrounds, one of shimmering gold, one basic black, and the main background of a New York City painting. The seven piece band led by Nick Burgess, largely hidden from view behind the curtains, are fully on the ball, leading and following the actors through the legendary Frank Loesser songbook. The choreography by Jim White is fast-paced, fluid, often frightening, and flawless. And then there's the acting.

You know when you turn around halfway through the production to find the entire audience smiling to themselves, there's charisma in the air. The relationship between the dancers and the band as they punctuate each other's statements, that's chemistry. And when you set your eyes on the stage again and the angelic Tracy Michailidis is stumbling around drunk on stage as Bible-reciting Sarah Brown, serenading Sky Masterson with “If I Were A Bell”, trying to make the case that a middle-aged hotshot gambler and a good Christian girl can fall in love... well, okay, that's awkward.

When Adelaide, the lovelorn showgirl sings to herself wistfully about her one true love's commitment issues, the audience wells up for her. But when her much older man, Nathan Detroit, played by the suave but otherwise unremarkable Frank Moore appears, he doesn't convince us he's any good for her. He doesn't seem to form a palpable connection with anyone – not with Adelaide, nor with his business partners Nicely-Nicely and Benny Southstreet (played impressively by Mike Paterson, who shines in his musical number, “Sit Down, You're Rocking The Boat”, and Marcel Jeannin respectively), nor anyone else in his craps crew.

The actors have put hundreds of hours of rehearsal in, and their punchy '40s era costumes are a second skin to them. The seven instrumentalists are warmed up nicely (-nicely), the set design is dazzling, and the run has been extended to the end of October. Why not stop by, warm up, and take a chance on a great play?

Guys and Dolls runs to October 31
Posted by THE CHARLEBOIS POST at 4:50 PM