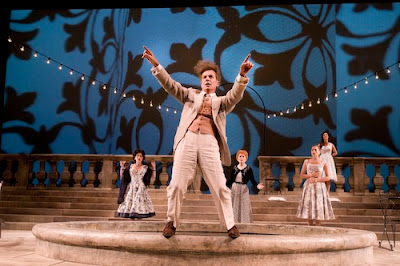 Two Sides of Love
by Élaine Charlebois
Les Femmes Savantes, brilliantly directed by Denis Marleau at the Théâtre du Nouveau Monde, tells the story of a family divided by the marriage choice of youngest daughter Henriette, played by Muriel Legrand with great energy and emotion.
On one side of the debate we find Philaminte, the matriarch of the family (played by Christiane Pasquier with authority and spot-on severity), Armande, the eldest daughter (Noémie Godin-Vigneau), and Bélise, sister-in-law of Philaminte, a character brought to life with great humour by Sylvie Léonard. They all promote female intellectual emancipation over physical and emotional love. On the other side of the family feud with Henriette stands Chrysale, the passive father figure (played by a charismatic Henri Chassé), Clitandre, Henriette's fiancé (François-Xavier Dufour), and Ariste, Chrysale’s brother (played with subtle yet effective comedy by Bruno Marcil). This group values the simple satisfaction of romantic love.


With regards to the aesthetic elements of the play, Ateliers Boscus’s set design evoked both simplicity and creativity. Though the basic foundation of the set-up never really changed, the video montage that was the backdrop of the piece and the introduction of subtle props throughout the play definitely made for a visually stimulating experience. Furthermore, the 50s style costumes, created by Pierre-Guy Lapointe and his team, set the play from an interesting perspective.
In spite of the absence of an intermission, the cast of Les Femmes Savantes kept the audience engaged with their awesome energy and comedic abilities.  Carl Béchard, who played Trissotin, a poet with no real talent for the art form and Philaminte’s marriage choice for Henriette, was especially entertaining. He successfully displayed his talent for physical comedy throughout the entire production, an ability confirmed by the audience’s sincere laughter during each scene that featured the actor. Another stand-out performance came from Sylvie Léonard who grabbed the audience’s attention with her highly comedic portrayal of a delusional Bélise. Overall, however, the execution of the cast, both on an individual basis and as a team, was remarkable.
Les femmes savantes continues to October 27
Posted by THE CHARLEBOIS POST at 4:33 PM