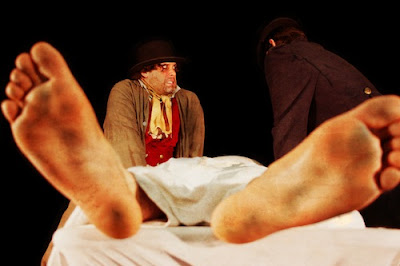 BLOOD AND BELIEF
joel fishbane
The first thing composer / lyricist Joseph Aragon thought after hearing about 19th century serial killers William Burke and William Hare was “that would make an awesome musical!”. Infamous in their own time, Burke and Hare were a pair of Irish immigrants who supposedly sold the bodies of their victims to medical schools who used them as cadavers. “The story had large emotions and large stakes,” said Aragon. “At the same time [it had] sophisticated themes, like class struggles, medical ethics and the value of human life.”
And so Bloodless was born. A new musical that isn’t based on a popular movie or book is a rare thing today. Rarer still is a new Canadian musical being given a plum spot in the Mirvish’s new season: Bloodless will appear in Toronto’s Panasonic Theatre throughout October.  “It's more than a little overwhelming,” admitted Aragon. “This production represents a lot of firsts for me: my first fully professional production, my first major production outside of Winnipeg."
Nurturing a musical beyond the first production takes money, resources and connections -- none of which I had

Bloodless began as a labour of love for Aragon, a self-taught composer who wrote the book, music and lyrics for the show. “Playwriting is what I went to school for,” he told me. “When you do them all at the same time, they sort of smear together into one discipline, with progress in one area affecting the other two.” The two-time winner of the Harry S. Rintoul Memorial Award, he already has seven other musicals to his name, all of which have earned him acclaim.
Even so, he never expected Bloodless to have a life beyond its initial production at the Winnipeg Fringe. “Nurturing a musical beyond the first production takes money, resources and connections -- none of which I had,” said Aragon. “Not to mention that musicals -- especially new, unknown ones -- are incredibly risky ventures, and not many people are that adventurous.”
Enter Theatre 20, the very team of adventurers Aragon was looking for. Recently created by a group of Toronto artists, the company is devoted to producing Canadian musicals, either newly created or re-imagined. Aragon responded to the call for submissions and soon found himself meeting with director Adam Brazier, who shared his vision for Theatre 20. “At the time I thought it was really ambitious -- borderline crazy. But the company had some impressive names behind it, and I figured that if anyone's ever going to pull it off, it'll be them.”
Those impressive names include Brent Carver, Susan Gilmour and Trish Lindstrom. Oh yeah – it also includes Colm Wilkinson, the famed Canadian known for his portrayal as Jean Valjean in Les Miserables, among a host of other signature roles. There’s no doubt Theatre 20 is poised to become a revolutionary force in Canadian theatre. Their inaugural season has already involved a workshop of the musical Raindogs with the theatre students of Sheridan College. And they’ve slotted in another ambitious project as a follow-up to Bloodless: the famously “plotless” musical Company by Stephen Sondheim and George Furth.
But for now there’s that pair of singing serial killers to deal with. Aragon seems non-plussed by the potentially uncomfortable nature of the subject matter – after all, macabre themes have always made for good musicals, from The Threepenny Opera to Sweeney Todd. For Aragon, though, Bloodless is less about blood and more about belief. “What do we believe, how are our beliefs formed, and how do they affect our priorities and our choices?” he asked. “The characters in this show hold very strong beliefs - and by God, they act on them.”
In this, the characters are very much like the artists creating them: Aragon and the entire crew of Theatre 20 are unswerving in their conviction that Canada is hungry for new, homegrown musicals. And there’s no reason to think they’re wrong. With the success of Atomic Vaudeville’s Ride the Cyclone and Sidemart Theatre’s Haunted Hillbilly still fresh in our minds, one has every reason to be optimistic that we’re at the dawn of a new era for the Canadian musical.
Bloodless by Joseph Aragon runs at the Panasonic Theatre in Toronto from October 9 – 28. For tickets visit www.mirvish.com or call 416.872.1212
Posted by THE CHARLEBOIS POST at 12:02 AM