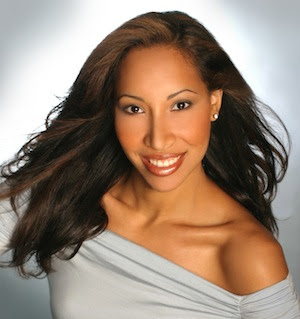 The reluctant diva
American soprano Nicole Cabell brings star-wattage to L’Opera de Montreal’s season-opening production of Mozart’s The Marriage of Figaro
By Richard Burnett
Montreal audiences have been clamouring for American soprano Nicole Cabell since she made her one-shot appearance at L’Opéra de Montreal’s Gala back in 2005 – the same year Cabell won the Cardiff Singer of the World competition.
Cabell now finally makes her company debut as La Contessa Almaviva in Mozart’s masterpiece The Marriage of Figaro by Wolfgang Amadeus Mozart, which originally premiered at Vienna’s Burgtheater in May 1786 and was last produced at L’Opéra de Montréal in 2003. 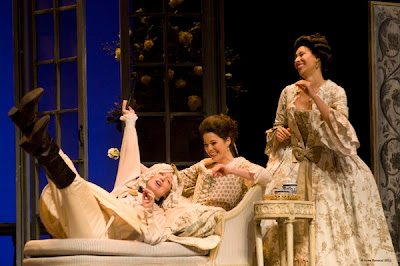 Cabell (r) in Figaro (photo credit: Yves Renaud)
The current co-production with The Michigan Opera premiered at Montreal’s Salle Wilfred-Pelletier on September 27, and it is solid and well-staged. While it lacks a big aria and bounces along with small steps, the second act is especially funny with plenty of nonstop sung dialogue (or recitatives) to keep the opera under three hours.
...the opera world has opened its arms to embrace everybody, including the multi-racial Cabell who is part African-American, Korean and European.
“When I was in college I studied acting for singers,” says Cabell, who has performed with the Metropolitan Opera, the Royal Opera House-Covent Garden and the Lyric Opera of Chicago. “The difficulty is you have to project because we are not amplified. So acting requires a bit of compromise. You don’t want to “cheat out” which is speaking, singing or acting into the wings or upstage away from the audience. But no matter what you do, no matter how much you act, you cannot stop realizing that you are also singing. It’s hard to do both at the same time. It’s the ultimate multi-tasking art form.”
For centuries the opera world was the domain of Europeans (read: white people). Increasingly, though, the opera world has opened its arms to embrace everybody, including the multi-racial Cabell who is part African-American, Korean and European.
“Maybe it’s because we live in a more progressive time – at least in some areas,” Cabell says. “I have not experienced any difficulty at all. In fact [my mixed background] has turned out to be an advantage, singing stuff like Porgy and Bess. I can sing this material and be part of productions that need a certain Asian-Indian look. If my background is impeding me, no one has told me anything to my face. I’m not aware of it.”
Do not call Cabell a diva.
Just one thing: Whatever you do, do not call Nicole Cabell – protégée of the great Marilyn Horne (“We keep in touch all the time and she always offers me career advice”) – a diva.
“The term diva has changed over the decades. In the past it was used for opera singers who were prima donnas – a lead female character who would demand respect,” Cabell explains. “But as the years went on, it’s become about people who are too big for their britches. It has a negative connotation.”
Cabell pauses. “Today it also describes a woman who is extremely self-confident.”
If so, does that not make Nicole Cabell a strong, self-confident and beautiful diva?
Cabell laughs good-naturedly.
“I try to avoid that term!” she says. “It’s hard because then you also have to present yourself a certain way to be taken seriously as a star singer. For me, I never wanted to be a diva. I consider myself down-to-earth.”
L’Opéra de Montréal’s production of Mozart’s The Marriage of Figaro continues September 20-22-24 at 7:30 p.m. at Salle Wilfrid Pelletier of Place des Arts. Running time: 2 hrs 50 min, including one 15-minute intermission. In Italian with English and French subtitles. For tickets surf to the Place des Arts website or to the Opéra de Montréal's site.
Posted by THE CHARLEBOIS POST at 12:02 AM