Review: Chi of Shaolin Tale of the Dragon 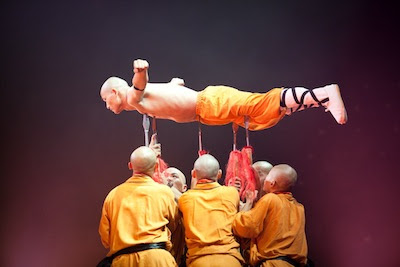 Some old things are unpalatable, some age well. I do not suggest eating Chinese thousand year old eggs, for instance, since their Chi (energy) may well be past their “best before” date. However, the Chi of Shaolin, the two thousand year old legendary martial arts Buddhist monastery of Henan province is more powerful and buoyant than ever. This is apparent  in the current production at  the Tohu theatre, called “Tale of the Dragon”

The amazing company of 8 skilled martial arts men and 5 equally skilled women acrobats has toured the world, having been produced in 48 countries. It has been particularly popular in Florida and Nevada. You don't have to pay Vegas prices to see spectacular leaping, jumping, dodging with fist, lance, sword and ax balanced by magnificent body control of the gaily attired women.

Their one drawback to date has been no connecting story thread.

Enter Guy Caron, former artistic director of Cirque de Soleil who introduced the missing piece, Cirque style, with a young burglar who crashes a rich house, is discovered and left near dead by the owner. Along passes a Shaolin monk who carries the corpse to the monastery where he is revived by what seemed to me to be the laying of hands. He then learns the way of the monk warriors and a lot of kung fu techniques. On leaving this refuge, he encounters bandits and, I think, a peaceful dragon (it actually looked like a giant Pekingese dog). He returns to the scene of his theft and makes amends. American style resolution.

The wonderful music by Scott Price of Toronto - who has worked with many Quebec stars, including, of course, Celine - is lush, and, while not especially Chinese, carries the audience right along.

I kept thinking that if these back flipping and sometimes seemingly airborne actors could take up hockey, they would drive the defensemen crazy. But then, I once proposed Sumo wrestlers as goalies and that got nowhere.

Chi of Shaolin continues at the Tohu until October 8
Posted by THE CHARLEBOIS POST at 4:11 PM

Email ThisBlogThis!Share to TwitterShare to FacebookShare to Pinterest
Labels: Byron Toben, Cho of shaolin tale of the dragon