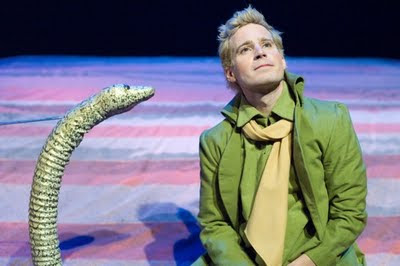 Geordie's Little Prince
QDF FALL CALENDAR LAUNCH PLAYS TO FULL HOUSE
By Byron Toben
The 39 year old Quebec Drama Federation has  always been a valuable umbrella for
English-speaking theatre groups. It really became a major focal point a few years ago when former head ELISE MENARD inaugurated its quarterly Theatre Calendar. This handy palm sized guide has become indispensible to local theatre fans and aficionados. Its influence has grown under the current executive director, JANE NEEDLES, especially with the QDF's increasingly useful web site and the fun filled public launches. The Fall 2011, held at the Centaur, was a festive occasion for le tout théâtre
anglo-montrealais.
Seventeen of the many forthcoming productions staged 5 minute excerpts of their shows.  First, however, Jane led a tribute to former Artistic Director of the Segal Centre, BRYNA WASSERMAN, who has relocated to New York and was virtually present by image and phone. This was followed with images of the current Segal hit, EQUUS, which Bryna shepherded here before leaving. Things really took off as host TRISTAN D. LALLA introduced a parade of talent. They all looked SO good. Ah, t'were time and money enough, t'would be great to see them all. What particularly entranced us (well, me), by category were:
ONE PERSON SHOWS
HYENA SUBPOENA The latest by internationally acclaimed CATHERINE KIDD, performance poet, based on her tours of Africa. As usual, great subtle humour, fantastic voice, Dr. Seuss-like rhymes. This time ALISON DARCY has been secured to direct. Cat's core cult following will surely expand with this one.
MY PREGNANT BROTHER. If any one else has a core following, it is  JOHANNA NUTTER. She remounts her prize winning Fringe show, this time in French, at the venerable La Pettite Licorne (Fridays in English)
STORI YA stars WARONA SETSHWAELO  of  Black Theatre Workshop  who blends song and tales in a journey from Africa to Canada..
MUSICALS
THE WILD PARTY Fifteen performers gyrate in this 1920s set party which captures the abandon of the times. And who can resist anything with producer/ choreographer/performer NADIA VERRUCCI  involved?
INTO THE WOODS  This Sondheim classic gives new life to Cinderella. Jack (of beanstalk fame) Rapunzel (she of the really long hair) and assorted fairy tale characters, all with a great score.
LITERARY CLASSICS
THE LITTLE PRINCE.  Some music enhances this adaptation of aviator Antoine de Saint-Exupery's beloved tale. DANIEL BROCHU, who appears on the cover of the Calendar as the planet hopping Prince is perfectly cast. Plus, you get ever popular locals such as DANIELLE DESORMEAUX and HARRY STANDJOFSKI.
FAR FROM THE MADDING CROWD. This adaptation of Thomas Hardy's novel
(familiar to English Lit majors everywhere) casts ten actors in GABRIELLE SOSKIN's
latest exploration of  old England. If you missed the star studded film version (1967) or the TV version (1998)..or even if you saw them, you  will enjoy this ensemble acting co-directed by CHRISTOPHER MOORE who acts in it as well.
NEW WORK BY FINE LOCAL PLAYWRIGHTS
TRUE NATURE This latest by the indefatigable COLLEEN CURRAN kicks off  the
Centaur's fall season. I saw it in a workshop reading and can't wait to see the final version. This world premiere is based on the story of pre-Darwinian fossil finder Mary Anning, who, heretofore obscured by fetters of gender and class, finally gets her due. Lightning apparently plays a role in this must-see. (How do they harness that lightning?) I'd go to anything with MARY HARVEY or LENI  PARKER or FELICIA SHULMAN. And, here, by Darwin, you got all three in the cast.
FOUR MINUTES IF YOU BLEED.  Thank you, Co-writer NED COX for preserving a male presence to balance all of the talented females featured  in the 9 shows above. Of course you were collaborating with ALEXANDRA HABER, in this delightful Christmas Party setting wherein hockey, sibling rivalry and recipes collide. The talented cast includes the always crowd-pleasing FELICIA SHULMAN and versatile NEAL NAPIER.
Posted by THE CHARLEBOIS POST at 3:01 PM