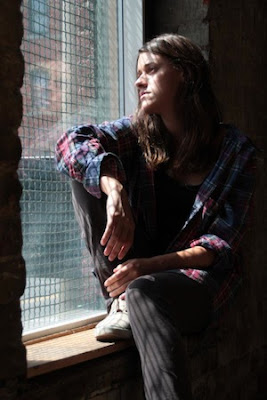 Hopeless
A dark look into prisons for women
by Estelle Rosen
I don’t know about you but I’ve never visited anyone in prison – until tonight that is. Well - ok  - it was a theatre space with jail cells created by a set on stage.
Unfit For Bears portrays sad, touching stories by the women inmates in a prison for women. The newest inmate Bobby (Emilie Alvarez) jailed for drug dealing as a favor to her boyfriend who then dumps her while in prison is one example.
Performances make us acutely aware of the sense of futility these women experience on a daily basis. As Joss (Natalie T) says, time goes slow in here.
Performances were excellent.
The title is significant. The Archambault Commission, set up to study the penitentiary system in Canada, described the notorious P4W (prison for women) as “unfit for bears, let alone women.”
Performances were excellent. I cared about the characters. Catherine Lemieux portraying her character Ruthie’s unimaginable suffering knowing her boyfriend molested her daughter and didn’t do anything about it was heartbreaking and heartfelt. Natalie T as Joss brought dimension to a difficult character; seemingly calm and reasonable but not.
Adapting a large old warehouse to a theatre space made it necessary for too many blackouts during scene changes; but volatile stories keep emotions on high and give us much to think about. One can’t help wondering if jail was really the correct place for these women afflicted by the vicissitudes of life.
The Archambault report also condemned jails focusing only on detention, rather than rehabilitation as intended. Sound familiar? Think: current Canadian government plans to expand the prison system…
To Sept. 24
Unfit For Bears
3550 St Jacques W
Les Ateliers Jean-Brillant
Posted by THE CHARLEBOIS POST at 2:47 PM