It Doesn't End With a Tony

UPSTAGE
Tell us a little bit about yourself before we speak about Theatre For One. Did you always want to be a Set Designer? 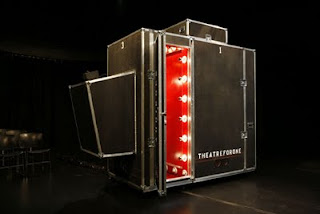 JONES
No. I wanted to be involved in theatre or dance but being a Set Designer is often a career that people don’t even realize is available to them.
While I was studying at Marianopolis College, I had the guidance of a wonderful teacher Victor Garroway who had an instinct that that might be a path for me to follow. He was the one who put the idea on the table and helped me see what my options might be. That was a key moment.
I did my undergraduate degree at Concordia then pursued graduate studies in New York.  Once he set me on that path, I followed it as far as I could.
I realized it’s possible to make a very intimate experience happen even on a larger scale.


UPSTAGE
I read that you’re interested in exploring the relationship between audience and actor. Could you expand on this.
JONES
As a Set Designer, that’s something that’s always on your mind. You’re thinking about how the actors are shaped in space and how the way that you shape them in space allows them to connect with the audience. Even in a very large house, Broadway or opera for example, that relationship is under consideration.
In the process of thinking about that relationship, I realized it’s possible to make a very intimate experience happen even on a larger scale.  I thought what if I just made it the most intimate experience I could. So the work does feel like it’s a natural extension of the set design work in that it’s using space as a vehicle for exploring and creating the relationship between the actor and the audience.
I’m  always looking at that relationship under a microscope and feeling every inch and every gesture.


UPSTAGE
Sounds like Theatre For One personifies this idea.
JONES
Yes. It really came about as an experiment. I asked myself what would happen if I did that. What if I brought it down to two people. Would it  take away from the experience because we always talk about the collective audience or would  it enhance it? This continues to be interesting. Each piece whether spoken or music, I’m  always looking at that relationship under a microscope and feeling every inch and every gesture.
UPSTAGE
What was the specific inspiration for Theatre For One?
JONES
I had been at a wedding. A friend at the wedding is a magician. He had performed in the ceremony. As he meandered around the reception,  he came up to me and performed a magic trick standing directly in front of me. The experience of having a magic trick performed for you and you alone was very powerful. Steve Cuiffo is the magician I met at the wedding and has become one of the performers in Theatre For One.  He’ll be coming to Montreal.
UPSTAGE
From what I understand, a performance is done individually for one person at a  time in a small booth.
JONES
When you get into line, you don’t know exactly what you’re going to see. The performances happen in rotation so each performer will perform the piece, then leave the booth, someone else will come in.
Then when the performer returns, you’re invited into the booth. In many ways we tried to replicate a conventional theatre experience. You go in, sit down, music playing, lights fade, then door opens and performer is on the other side. After performance, the door closes and you’re on your way again.
It’s about two people looking at each other, eye to eye and sharing a piece of work.


UPSTAGE
You have a good cast including Nathalie Claude, Danette MacKay, Harry Standjofski.  Solo audience member will see one  performer in the booth. Will it be any one of the cast?
JONES
Yes. Everything is about what’s happening in that moment. It’s about two people looking at each other, eye to eye and sharing a piece of work. What I’ve found is that it equalizes the relationship between actor and  audience member in a way that creates a mutual investment. It’s that mutual investment that heightens the experience.
Sometimes as an audience member in traditional theatre, it’s very easy to sit back and wait to  see if the piece deserves your full attention. Your mind can easily wander. In this solo experience, you’re aware of the gift you’re giving the actor of your presence and more likely to give your full attention. The actor gets a very positive experience and in turn gives you  the gift of a private performance. Mutual interdependence has made it so rewarding to work on.
...even though it’s a theatre unto itself, in a way it’s a kind of parasite in that it’s also existing on the host space.


UPSTAGE
Theatre For One was presented in Times Square recently.  How would you compare theatre vs outdoor presentation?
JONES
I always find it interesting to see that even though it’s a theatre unto itself, in a way it’s a kind of parasite in that it’s also existing on the host space.
Whether Times Square, theatre or in this case Concordia gallery space, experiencing the relationship between two worlds is always interesting. Each one has its own particularity.
For this piece, it was important to have Montreal performers rather than bringing Theatre For One cast  from New York so that it would be connected to the city. I’m from Montreal as is my Associate Artistic Director Ana Cappelluto.  Ironically I’ve never done a project in Montreal since I left.  Some musicians from Pop Montreal will be performing as well
Sept. 22-25
Show details
Read David King's CharPo profile of Jones
Posted by THE CHARLEBOIS POST at 12:01 AM