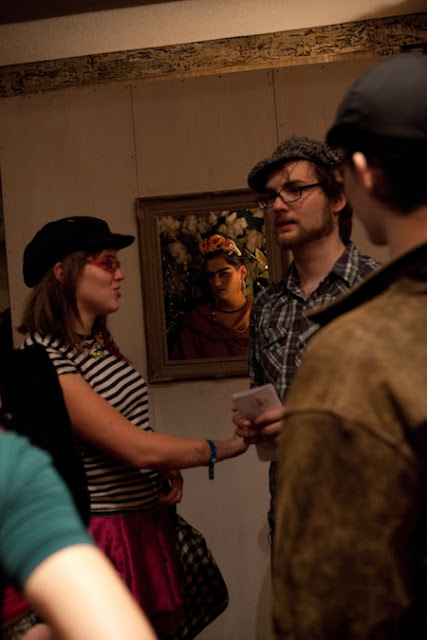 Anne Sophie Grenier performing Frida Kahlo at the last ArtHotel! (photo: Julian Stambouleh)
Part III
The Artists
by Crystle Reid
Each ArtHere! is made spectacular by the artists who are involved.  This week I asked a couple of them to share with me what’s it’s like to participate in an ArtHere! event.  First we have Anne-Sophie Grenier who,  at the upcming ArtHostel!,  will be presenting a Vaudeville Hall of Freaks:
After performing at ArtHere!, I needed a good sixteen hours of sleep to recover. Not only are you performing all night, but you also have to be on your toes and prepared for a different audience every time, especially if the piece is interactive. Since ArtHere! allows you to venture deep into the unexpected, push limits and break pretty much every conventional rule of theatre, you get exactly what you ask for: unexpected reactions. Before every new wave of audience members come into the performance space, I can’t help but think, “Will they get it?” Luckily, experience at ArtHere! has taught me that nine times out of ten, they do “get it”. Most audience members are fellow artists or art enthusiasts and happily embark on the adventure.
The major reason why I perform at ArtHere! events and hope to continue doing so is, quite simply, because it’s really fun. My piece for the upcoming ArtHostel! is a vaudeville Hall of Freaks. The idea came when I was writing an essay on the history of theatre for a class when I thought: “Gee-whiz, that sure looks like fun, I wish I could have lived 100 years ago and been a vaudeville star.” Well now I can! So despite the accompanying fatigue and nerves, it’s all worth it to me.

“What if?”
Next I talked to local actor Scott Humphrey who you may have seen in Sheep in Fog’s, Jesus Jello.  Scott has just finished wrapping up a production of Cyrano de Bergerac in Ottawa with Plosive Productions.  He will be presenting Empty Page(s), Empty Space(s):
I work primarily as an actor: my job entails giving life to characters from a script (or elsewhere). I work to create a physical presence on a stage or in a film where before there were only words, feelings, and actions; in short, I make the abstract concrete. And one of the most important tools I have at my disposal is the very basic “What if?” “What if a man working as a concierge at a low-end motel got roped into a crime syndicate?” “What if a young girl fell into a world filled with strange creatures and backwards logic?” “What if a young educated man came home to find his father dead and his mother newly married to his uncle, all the while knowing that this land will one day be his to inherit?” (You’ll excuse that last tired example.) My imagination and my desire to explore all facets of strange “What if?” worlds are indispensible to my work.
Of course, when you often ask yourself hypothetical questions, they start to arrive unbidden. In my bed, on the metro, in a restaurant, the “What if?” boils up inside me, sometimes being a logical follow-up to something I can see, and sometimes just arriving out of nowhere. What to do?
ArtHere! is a project that, from where I’m standing, gives freedom to artists to explore these nagging questions and scenarios. Oftentimes, something that’s popped into my head doesn’t have anything to do with the non-traditional performance space in which I’ll be working, but so much the better! “What if a young man knows it’s his destiny to be a writer, but he doesn’t know how put words together into sentences?” combines with “What if I couldn’t ever leave this tiny, claustrophobic bedroom?” to create something gripping from almost nothing. And then I, the artist, just go along for the ride, letting my gut lead me in the direction of the most interesting answer to the question I proposed.
Oh, and just in case you think that this all sounds super serious, it’s not. The humour of the everyday gets transposed into what artists do, whether they like it or not; it’s simply their choice whether it will serve their work to acknowledge it. Getting an obstacle-filled space (the actor’s favourite!) where you can take a kernel of an idea and expand it into something with shape, direction, rhythm, colour, and life. What more can I, the artist, ask for? How much closer can an audience get to the authentic theatrical experience?
To book tickets for ArtHostel!
Posted by THE CHARLEBOIS POST at 12:02 AM