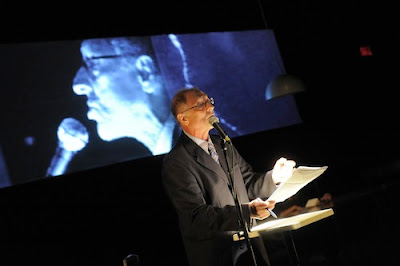 Grain(s) is Verbatim (through filters)
by Nanette Soucy

As no one can live without it, everybody gets to be an expert about food. Whether you’re choosing all kale and brown rice all the time, or larding up your trucker’s breakfast three times a day, with the variety available to the average North-American, the media obsession with dieting and obesity - by sheer necessity we have to form an opinion about what we put in our mouths.

The environment of Porte Parole’s Grain(s) is unusual. There are cameras and cables and shelving and neon lights and things growing. Upon entry, there are smiling people in lab coats mingling around, alternately engaging in deep discussion with the audience and reassuring its terrified looking members. As the show begins, members of the audience are interviewed and projected on a screen above. The polled audience has well thought-out opinions on GMOs, which is, by some cultural osmosis, actually informed by the story of Percy Schmeiser and Monsanto that they’re about to hear verbatim. Not from the mouths of those involved directly, but through filter upon filter of translation, accents, and interpretations.

Throughout the first act, we are blinded by science and technology, our senses bombarded with sounds, smells, projections, subtitles; this must be what being in a television audience feels like. The experience of watching a documentary unfold before your eyes through all these filters is great exercise for the brain. But by the second act, we learn that although things like real-life witness accounts and long court depositions are important parts of the story, unlike television procedurals, they aren’t intended to entertain.

Pushing three hours, Grain(s) takes the long way to show that the debate over whether GMOs are manna from heaven or poison is complicated -- biologically, legally, and in our smaller communities, emotionally. By revealing the logic of arguably average farmer Percy Schmeiser, embodied by  Guy Thauvette, Grain(s) is a reminder to think about where our food comes from, and how it’s made even if the grower itself hasn’t.

At this post-election time of stirred up tension between French and English, the bilingual cast, multiple accents and effective translation bring us home to the farm, whether in Saskatchewan or in the Eastern Townships, from which many city-dwellers and our preference for fancy organics hail, and reminds us that whatever language we speak, we all have to eat.

Grain(s) is at La Licorne to September 22
Posted by THE CHARLEBOIS POST at 11:00 PM