Review: Where the Blood Mixes 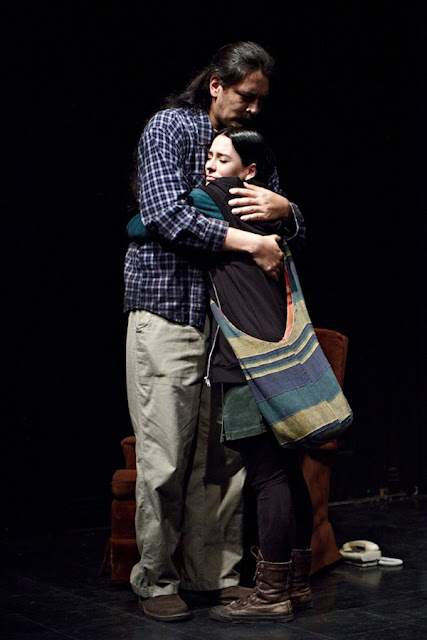 Canada's a fairly unassuming country. We're known for confusing politics, casual beers, icy temperatures and warm smiles. However, any true Canadian – especially anyone who lives in Quebec – knows, when it's hot, it's sweltering and when it's cold, it numbs to the bone. Some of our history is like that, too. We love our proud moments in history: the invention of insulin, the Battle of Vimy Ridge,  passing universal health care in '62, our tumultuous road to victory during the Summit Series in '72 against the Soviets, the entire Vancouver Olympics in '08 (including our tumultuous road to victory in Men's Hockey)... warm, friendly, glowing moments engraved on our currency, celebrated in our newspapers on anniversary years, boasted in our textbooks.


I can't relate to the Aboriginal struggle.

Where The Blood Mixes, written by Canadian playwright Kevin Loring, flips the rug up from under our polite Canadian passivity and uncovers the leftover dust of the residential school system which so many of us know so little about. Loring's play is centred around a group of friends (played by Jeremy Proulx, George Bender, and Emilee Valuz) who have grown up with each other through the residential schools, now in their adulthood. Alcoholism is a burden they carry around with them, poverty is another, and then there are the dark stories they no longer talk about. When Christine (Alarey Alsip), a long-lost daughter of one of these survivors, returns back to her native land in search of her parents, the stories begin to surface again.

I can't relate to the Aboriginal struggle. I would like to say I could, or that I was better informed on the intricacies of the history of First Nations' people, or that the society I grew up in wasn't the one holding this community out at arm's length to avoid an uncomfortable situation, but I can't even begin to comprehend the centuries of social ostracization, the downward spiral of alcoholism, the generations of submission to the majority culture, and, the pain.

I can relate to these characters, though. They live on a reserve, embittered alcoholics who would steal from their own family for beer money, they wait tirelessly by the river for a nice catch, and they can't outgrow the unspeakable horrors from childhood. But they're funny, and kind, and maybe a little lost. They rib on each other at the pub and get into brawls and make up because they need each other. And that's not all that unfamiliar to the average viewer.

This script doesn't tiptoe around the horrific events that occurred on our soil and to this culture. But it doesn't depress you with the details, either. The dialogue ranges from hilarious to heartbreaking, and it's all real – real people who are just trying to survive and protect each other from each other. Matched by a simple, elegant set design and a tasteful multimedia background, the production as a whole is clean, polished, and very effective.

This play is about a group of friends who hang out at a bar and rehash memories and talk about things that none of us ever want to talk about. Thank God they do.