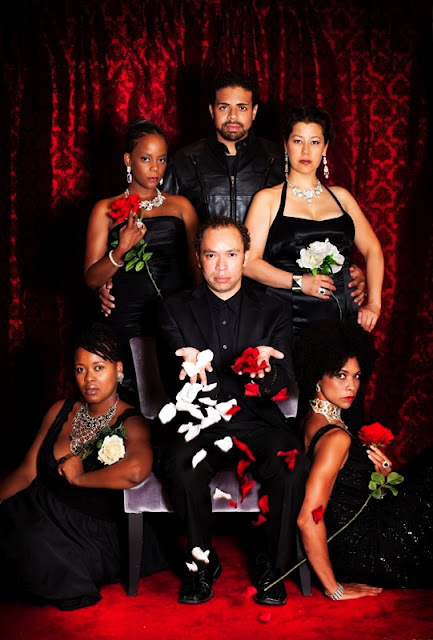 Metachroma presents a murderous, mad Richard III
by Rebecca Ugolini
A production of Richard III is an ambitious project to undertake for any theatre company, let alone one presenting its inaugural feature. Metachroma Theatre, a young Montreal-based theatre company whose mandate is to address the lack of visible minorities in Canadian theatre, deftly handles the long and complex Richard III by paying equal respect to the play’s violent, tragic, and humourous themes.
Jamie Robinson is everything a Richard should be—perfectly hateable and yet irresistible, glib, sly, and as the Acts move on, increasingly terrifying and detestable. Whether he occupies the centre stage or stalks along in the background of a scene, he is the one to watch, and in those mute moments, his freakish, funny facial contortions speak almost as loudly as his acid-laden speeches.
To all those of you who neglect impact of costumes in theatre—take that!

Richard III is not just about the madness of a man, but also about the inherited tragedy of its three central female characters, Queen Elizabeth (Tamara Brown), Lady Anne (Lucinda Davis), and Queen Margaret (Diana Fajrajsl).
Brown is a noble and proud queen, and Elizabeth’s moments of intense sadness and anger allow her tenacity as an actress to shine. Davis captivates with her sorrowful and soulful eyes, and her intense portrayal of a woman whose life consists of pain and mourning. Fajrajsl plays Margaret as only she can, with an eeriness befitting the Queen’s curse-casting role and a comedic tone reminiscent of the actresses’ performance in this summer’s Fringe offering of Oedipus Rex.
Costume designer Veronica Classen’s remixed period approach to the costumes in Richard III works well in some instances, and not as well in others. Queen Elizabeth’s sleeveless apricot bustier, beige skirt and pointed, low shoes showcase Brown’s statuesque, fit, womanly stature. Lady Anne’s costume could have used more refining, as her red (jersey?) top seemed to reveal the lines of garments underneath them under the bright stage lights. Not to nit-pick, but in the case of Queen Elizabeth’s jewelled headpiece and Lady Anne’s red ribbon woven into her bun, the hair ornaments seemed unintentionally hastily and messily-applied.
One unforgettable look is the cape and crown Richard wears in the final scene. Looking on such opulent embroidery and swinging yards of fabric in the final scenes underscore the selfish and greedy nature of Richard’s actions. To all those of you who neglect impact of costumes in theatre—take that!
Overall, this production is a fine start to the career of any company, and Metachroma should be proud of what they have achieved. Be warned, however, the play is not abridged in any fashion, and our showing, which began at 8:00 PM and allowed for a 15 minute intermission, only let out at 11:20 PM. It’s certainly not for the weak of heart, but then again, neither is the madness and intensity of Richard III…
Continues to September 30
Read the first-person article on the company's mandate
Posted by THE CHARLEBOIS POST at 6:33 PM